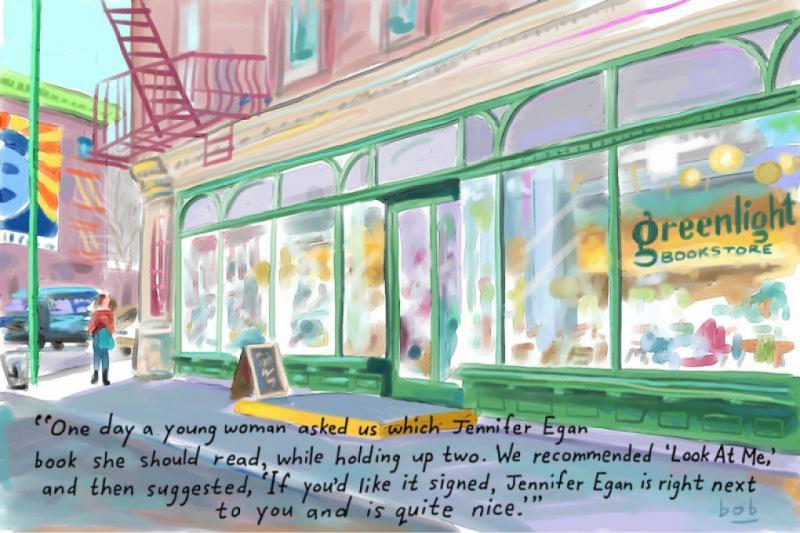 (Above: Illustration by Bob Eckstein, from Footnotes from the World's Greatest Bookstores)

Greenlight is grateful for the national, local, and industry newspapers, magazines, blogs and online dailies that have helped share our story -- a story that is uniquely ours, and also one that's shared by independent bookstores in the city and around the country. We're proud to have been named one of the best bookstores in the city multiple times, to have our Community Lender model used by independent bookstores around the country, and of course any time we're named the go-to local indie for writers we love.  Here, you'll find press coverage organized by year, with some of our favorite clippings highlighted.

“Even in pandemic times, the most rewarding things are getting to talk about and champion books we love, and getting to help people find just the right book for them,” says co-owner Jessica Stockton-Bagnulo. “And of course the absolute best is when those two things overlap.” 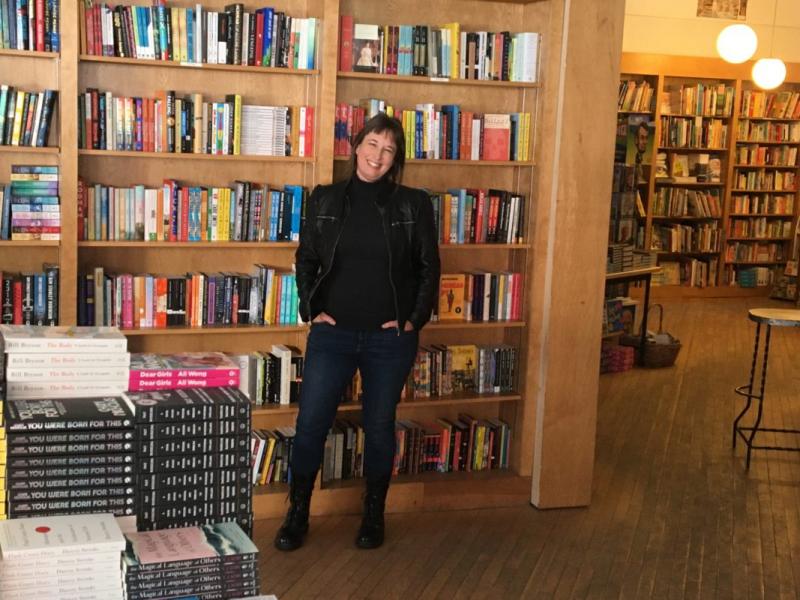 "“A Place to Encounter Your World”: Greenlight Bookstore Adapts to the Pandemic" (Bklyner, February 15, 2021) above

“I think people are obviously going to come back to the store to shop,” Greenlight e-commerce manager Shauna Westgate says. “People miss shopping and browsing. But I don’t see the [online] numbers slipping. I think e-commerce is going to continue to be strong and probably grow.”

"Indie Bookstores Embrace E-Commerce... and It Pays Off" (Publishers Weekly, February 5, 2021) above 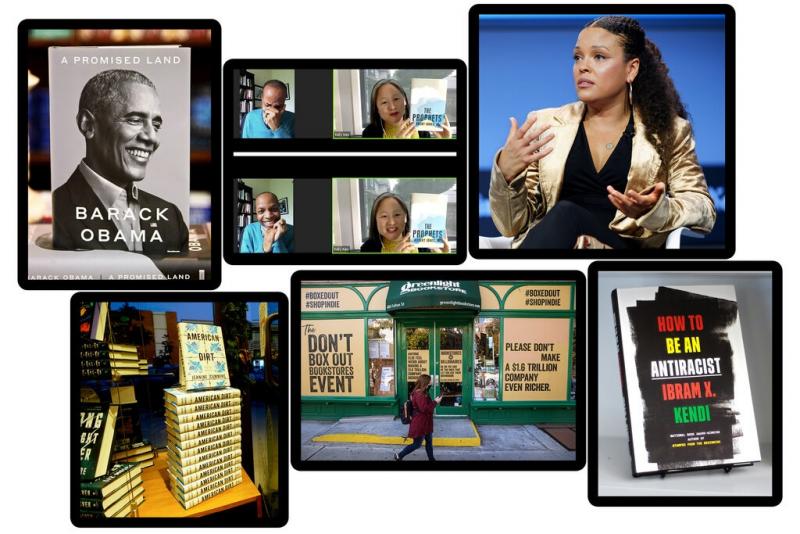 "How Politics, Protests and the Pandemic Shaped a Year in Books" (The New York Times, December 31, 2020) above

"The 19 best books ‘Fast Company’ staffers read during quarantine—and the indie bookstores where you can buy them" (Fast Company, November 6, 2020)

"Independent Bookstores Are Struggling. Here Are 13 Stylish Ways To Support Them." (HuffPost, October 23, 2020) 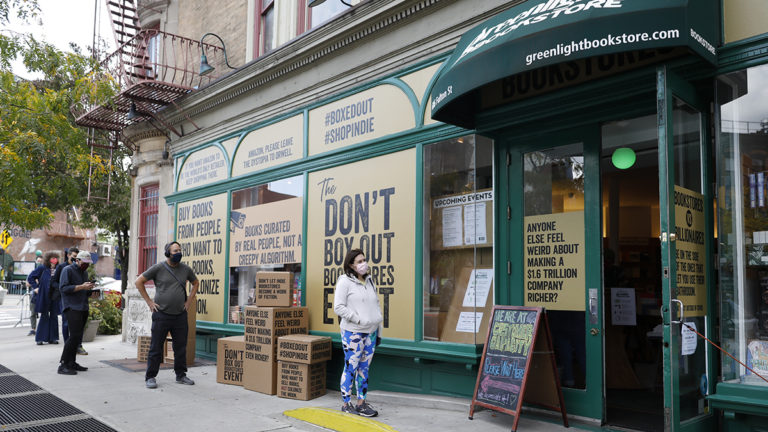 "How an Agency Cut Through ‘Purpose Clutter’ With Its Bookstore Campaign Trolling Amazon" (Adweek, October 19, 2020) above 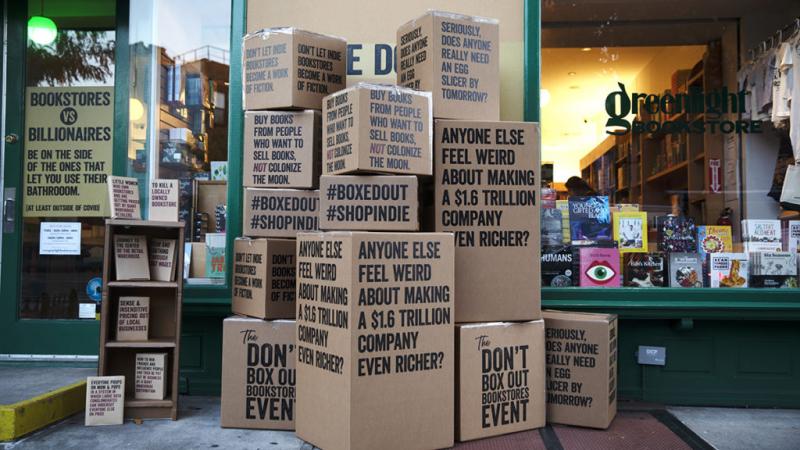 "Fighting Back Against Amazon, Indie Bookstores Wage a Cardboard-Wrapped Protest" (Adweek, October 15, 2020) above 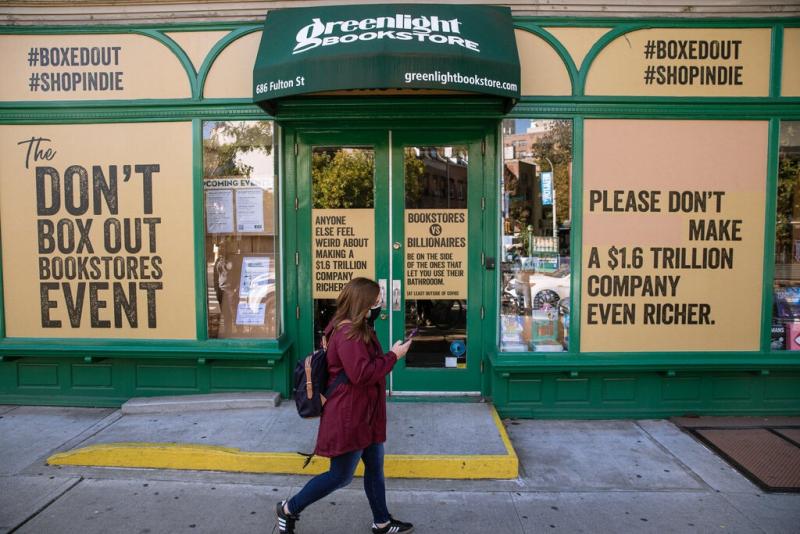 "Your Local Bookstore Wants You to Know That It’s Struggling" (The New York Times, October 15, 2020) above 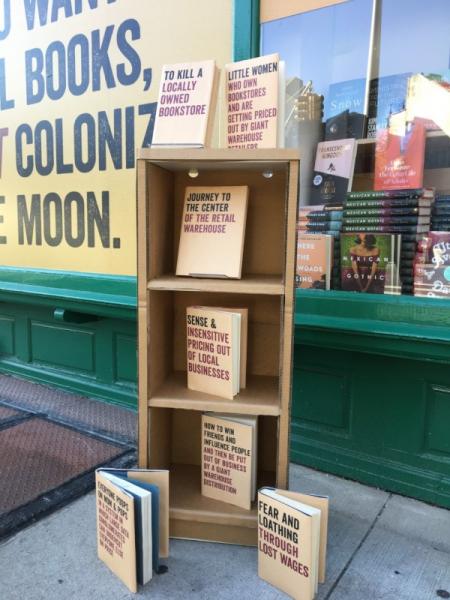 “If shoppers could shift more of their purchasing away from Amazon to local businesses like ours ... it could make all the difference in allowing us to survive and thrive for years to come. We hope Boxed Out will have that effect." - Greenlight co-owner Jessica Stockton-Bagnulo 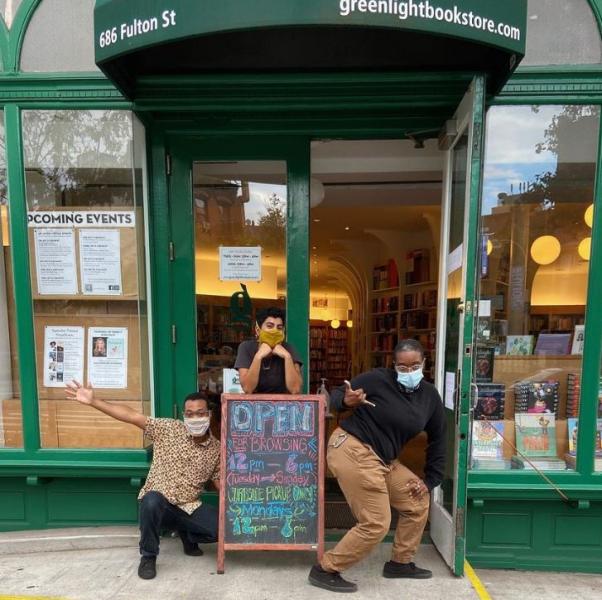 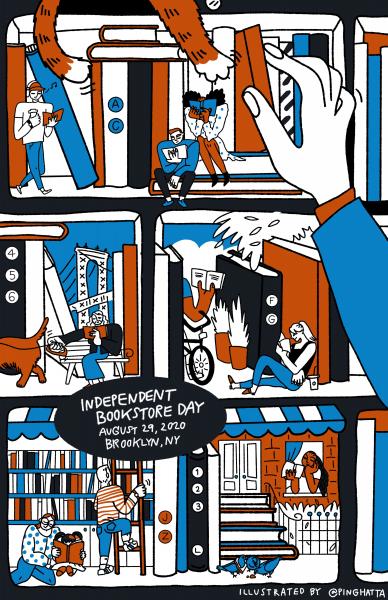 "[My favorite indie bookstore is] Greenlight Bookstore in Prospect Lefferts Gardens, my neighborhood. It's sweet and small and perfect."

"I find that independent bookstores are also more likely to support the people in their communities. When I first published my novel, my local bookstore, Greenlight, prominently displayed my books. So did my local bookstore, Bookophilia and Kingston Bookshop in Jamaica. I felt like a hometown hero."

"Booksellers Look to Curbsides and Online Sales, Not In-Store Customers" (Publishers Weekly, May 12, 2020)

"This is Chance! New York Magazine writer Jon Mooallem provided a history of the largest earthquake in North American history that took place in Alaska in 1964" (C-SPAN2 BookTV, April 17, 2020, video)

"I’m sure I’m not going to be the only Strategist team member to bring up Greenlight Bookstore here. [Editors’ note: She’s right. You’ll see.] It hosts the best events. You’re crammed in like sardines but no one cares because you’re having such intimate conversations while also looking out the big windows onto the leafy Fort Greene streets."

"The Local Stores We’re Supporting During the Coronavirus Outbreak" (The Strategist, March 24, 2020) above

"The Ones We've Been Waiting For—Time national correspondent Charlotte Alter reported on how millennials have gained leadership roles at the local and national level" (C-SPAN2 BookTV, February 19, 2020, video)

"Duke is going to need another walk. Sometimes we’ll walk to Greenlight Bookstore. I get a discount because of my membership with BAM. It’s also very dog-friendly."

"How a Champion of Female Filmmakers Spends Her Sundays" (The New York Times, February 7, 2020) above 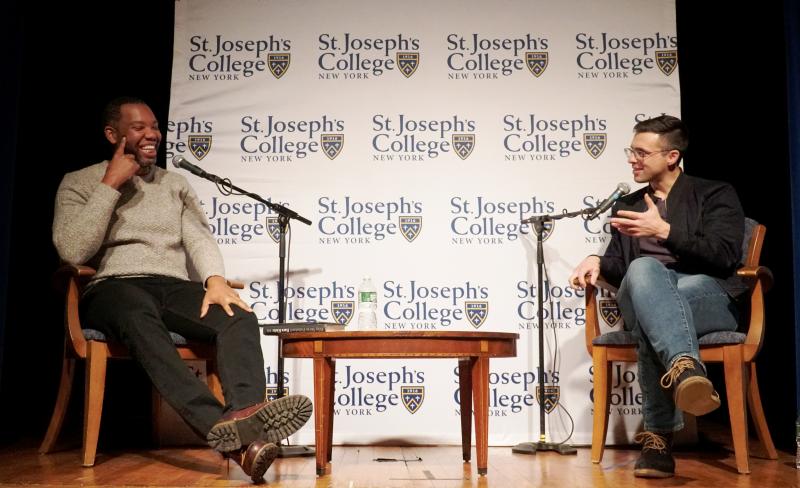 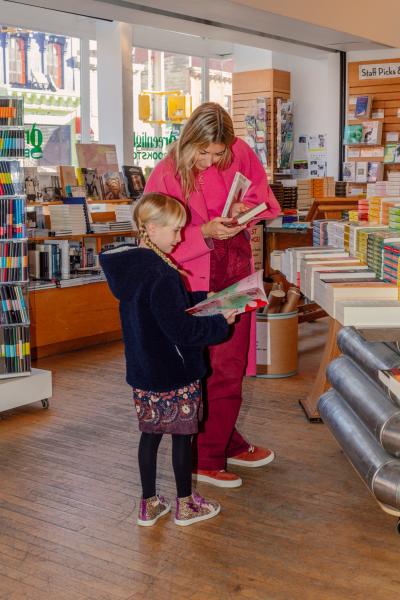 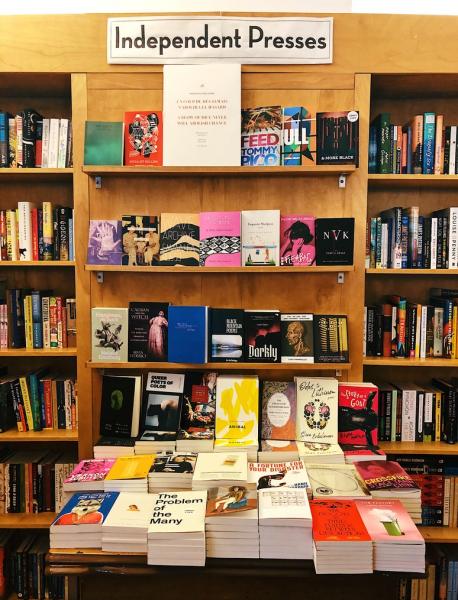 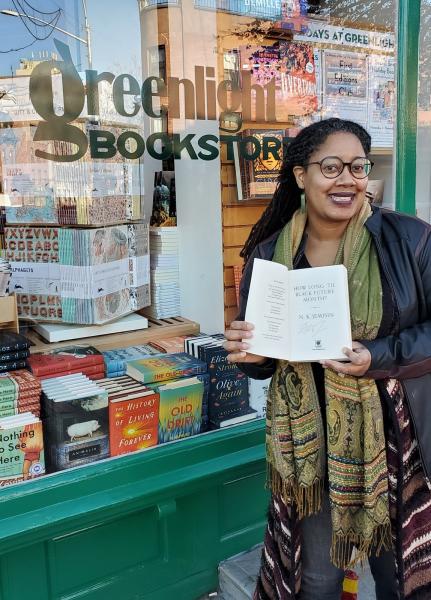 "Order Online from These 10+ Independent Bookstores (Not Amazon)" (deedispeaking.com, November 23, 2019) 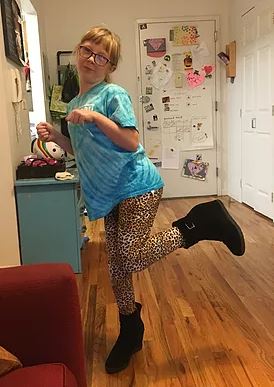 Tucked into the leafy Fort Greene neighborhood of Brooklyn lies Greenlight Bookstore, a gem of a shop with big street-facing windows and a wide selection of new and old reads.

"8 of the Coolest Indie Bookstores in the United States" (themanual.com, August 26, 2019) above

A charming and historic location where the staff really care about quality literature and are always eager to share personal recommendations, discuss the finest classics and dissect the latest releases, and engage with customers in ways that big brand bookstores simply do not, Greenlight Bookstore is one of the best places to shop for books in NYC, as well as being a wonderful cultural hub for the local community and literary enthusiasts.

"Charged—New York Magazine’s Emily Bazelon took part in a discussion of her book, Charged: The New Movement to Transform American Prosecution and End Mass Incarceration, in which she reported on the power of prosecutors in the American criminal justice system" (C-SPAN2 BookTV, April 17, 2019, video) 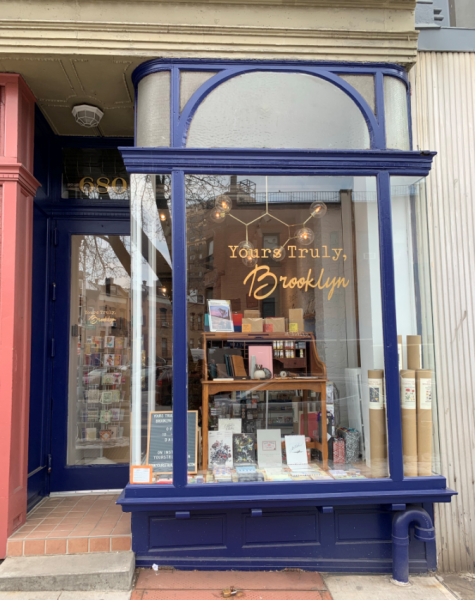 "It might seem as though bookstores in particular have the most to celebrate about Amazon's retreat from Queens, but the victory is larger than that: it belongs to advocates for workers, immigrants, residents, and small businesses throughout our city." -Greenlight Bookstore co-owner Jessica Stockton Bagnulo

"How NYC Books Through Bars is bringing books to inmates" (Shareable, January 10, 2019) 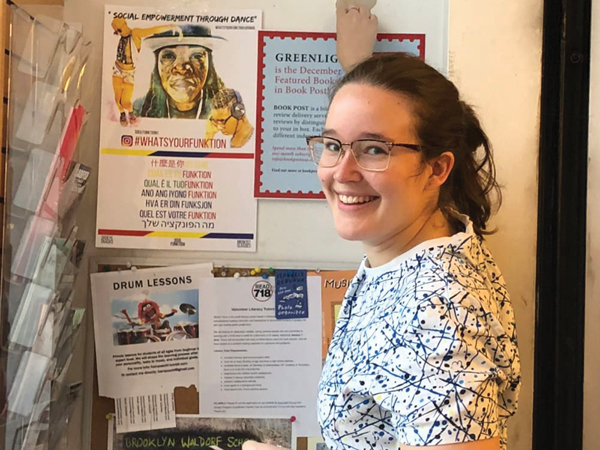 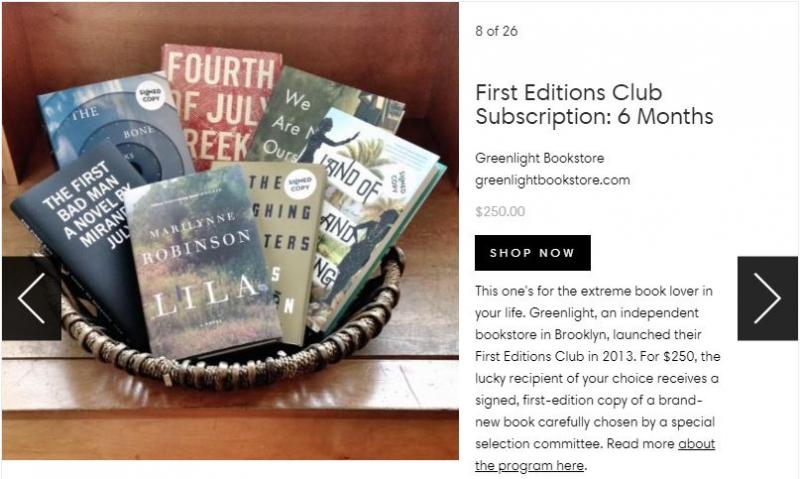 I might also swing by Greenlight Bookstore, this lovely independent bookstore in the neighborhood. I made the mistake recently of buying Ron Chernow’s biography of Alexander Hamilton, which is 818 pages long. It’s going great so far, I’m on about page 23!

Initiated by a conversation between [Jarrod Annis of Greenlight Bookstore] and former CLMP executive director Jeffrey Lependorf, the IBC will work in collaboration with SPD and CLMP to bring together booksellers focused on selling small press poetry, literary fiction and works in translation.

"You can only grow so much in a physical space," said Greenlight co-owner Rebecca Fitting, "then you have to figure out ways to grow outside of it."

"Bookstores are finding creative ways to survive and thrive in the age of Amazon" (Crain's New York, September 17, 2018) above

"The Bookstore Recommends: 10 Great Small Press Books You Should Read: Brooklyn's Greenlight With Favorites in Poetry and Fiction" (LitHub, September 14, 2018)

Greenlight is another spot with two locations to choose from – 686 Fulton Street, or 632 Flatbush Avenue – and has also remained a consistent favorite of mine, in part due to the book selection, but also because they tend to have really solid programming! (I mean, Eileen FLIPPIN’ Myles is gonna be at the Fort Greene shop tomorrow night, and that’s just one example.)

"A Few of Our (My) Favorite NYC Bookstores" (BrightestYoungThings.com, September 11, 2018) above 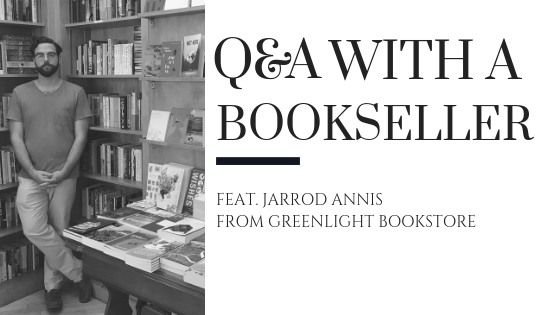 "Q&A with a Bookseller, featuring Jarrod Annis from Greenlight Bookstore" (The Authors Guild, September 4, 2018) above

"Prospect Lefferts Gardens: What to do in the rapidly changing parkside neighborhood" (AM New York, July 31, 2018) 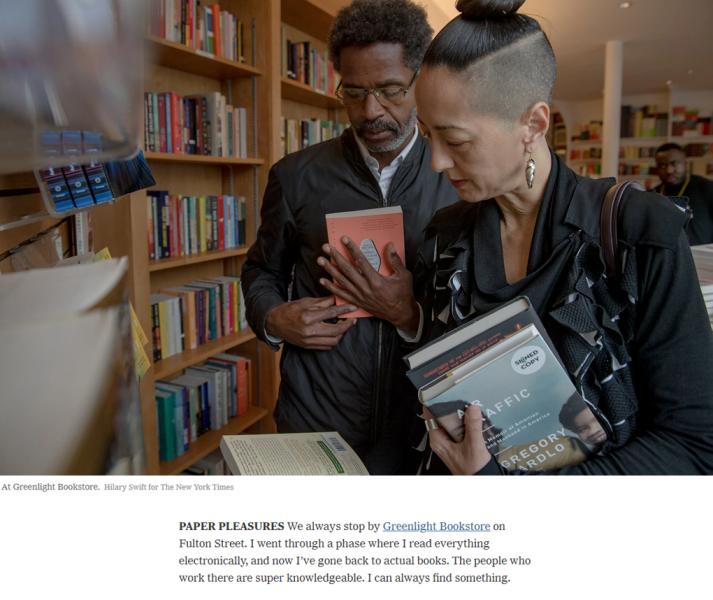 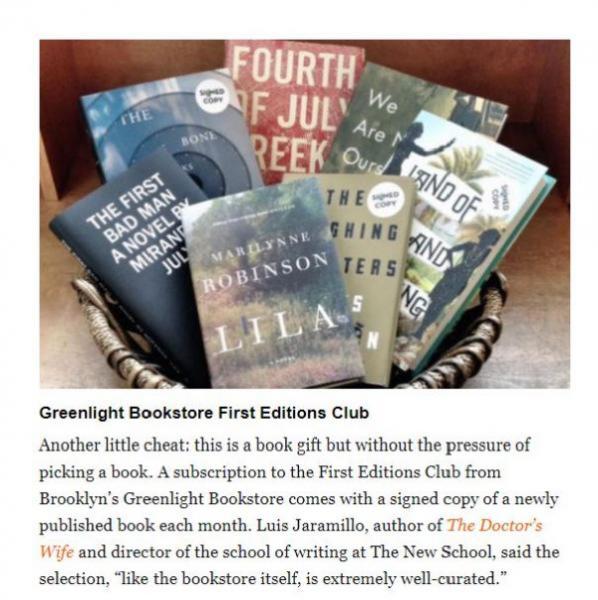 "Cool Music Video Set of the Day: Greenlight Bookstore" (Shelf Awareness, May 7, 2018) video above, shot on location at our Fort Greene store!

"I feel that we’re collaborators in the project of selling my book and other books we all believe in. I’ve attended a book group there, interviewed other writers there, and signed my own books for people all over the country who’ve ordered them there. I also love to browse; it’s a beautiful, light-saturated place, and I always make discoveries. I buy most of my books there. — author Jennifer Egan

"Writers Really Love Seeing People Being Courteous on the Subway" (Vulture, April 26, 2018) above

"We are the little bookstore that could," owners said. "Our first steady flow of customers were all people who were like, 'I just had to come in to buy a book,'"

"7 Gift Ideas Instead of the Feminist T-Shirt" (Vogue.com, December 8, 2018) featuring our City of Women poster!

"Playing by the book: Why some landlords are leasing to independent bookshops" (TheRealDeal.com, November 21, 2017)

"I Can't Breathe—Matt Taibbi recounted the events leading up to the death of Eric Garner and examined issues surrounding policing and mass incarceration. He was in conversation with journalist and author Toure'" (C-SPAN2 BookTV, November 1, 2018, video)

"Brooklyn in the spring is magical. My daughter and I love spending a Saturday walking around Fort Greene. Flowers are blooming, couples are canoodling, Brooklyn Flea is open for business... We’d visit Greenlight Bookstore, or the fabulous playground by the Clinton/Washington A train, catch a street festival, or a matinee at BAM. There’s always something happening. —author Tia Williams on her favorite things to do in Brooklyn 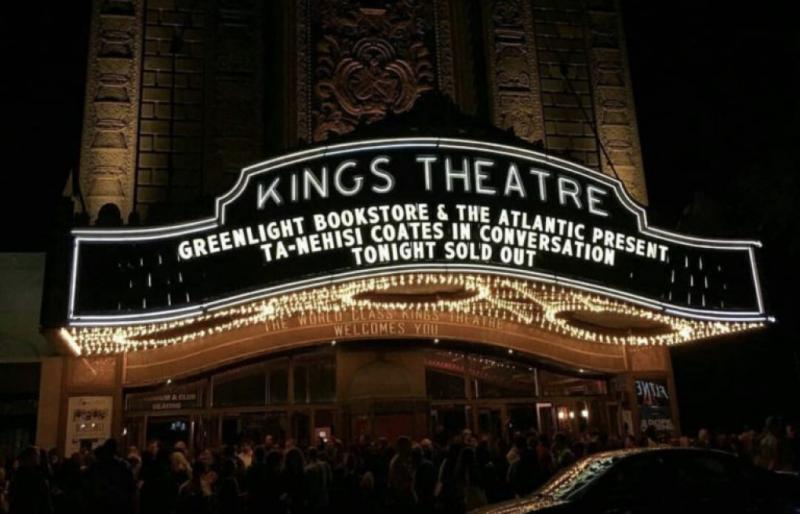 "In Conversation with Ta-Nehisi Coates: Seeking Hope in a World That Bends Towards Chaos" (BK Reader, October 7, 2017) above 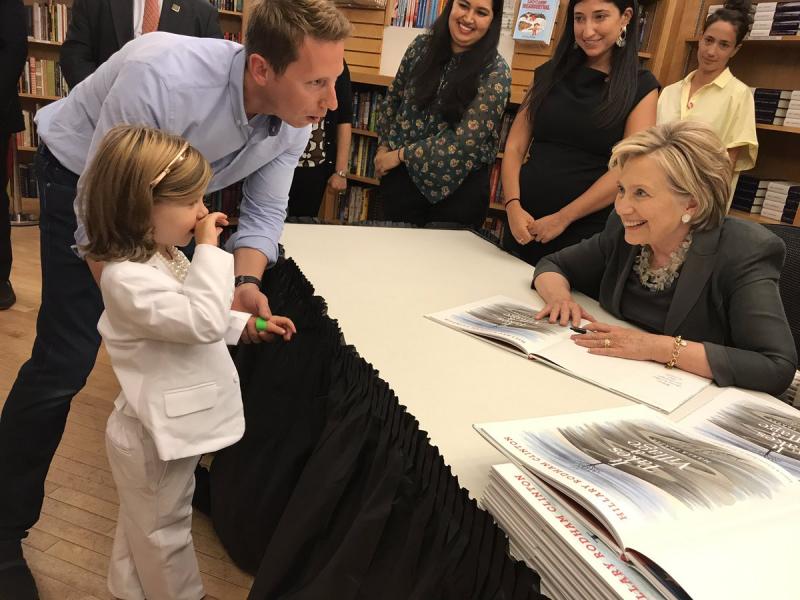 "Hillary Clinton Met A Pantsuit-Wearing Fan On Her 'What Happened' Book Tour & The Photo Is Adorable" (Bustle, September 2017) above

"The 28 coolest independent bookstores in the US" (Matador Network, September 25, 2017)

"Ta-Nehisi Coates Will Talk About His New Book At The Kings Theatre This Fall" (Gothamist, August 5, 2017)

"Here in Brooklyn, on Fulton Street, there’s Greenlight Bookstore. I just love it because there are so many types of people represented there, and they’re so supportive of local writers. — poet, actress, and activist Amber Tamblyn

"The perfect date night, according to Amber Tamblyn and David Cross" (New York Post, May 20, 2017)

"My Life with Bob—Pamela Paul talked about her book My Life with Bob: Flawed Heroine Keeps Book of Books, Plot Ensues, in which she offers a look into her journal that lists all of the books she has read over the past twenty-eight years" (C-SPAN2 BookTV, May 3, 2017, video)

"NYC is short on bookstores -- but independent owners are changing that" (New York Post, April 2, 2017) 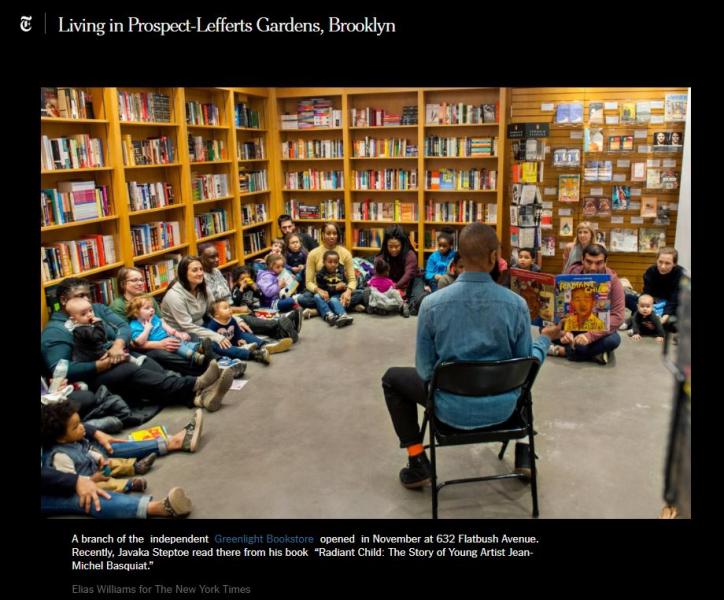 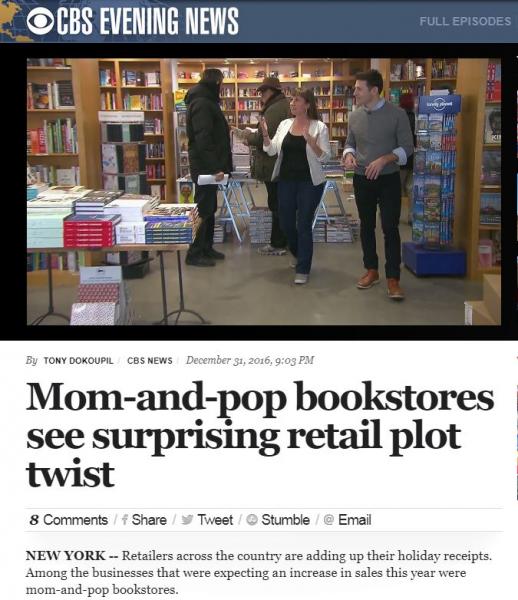 "Around Indies: Doors Open at Print, Avid, and Greenlight" (Bookselling This Week, November 30, 2016) 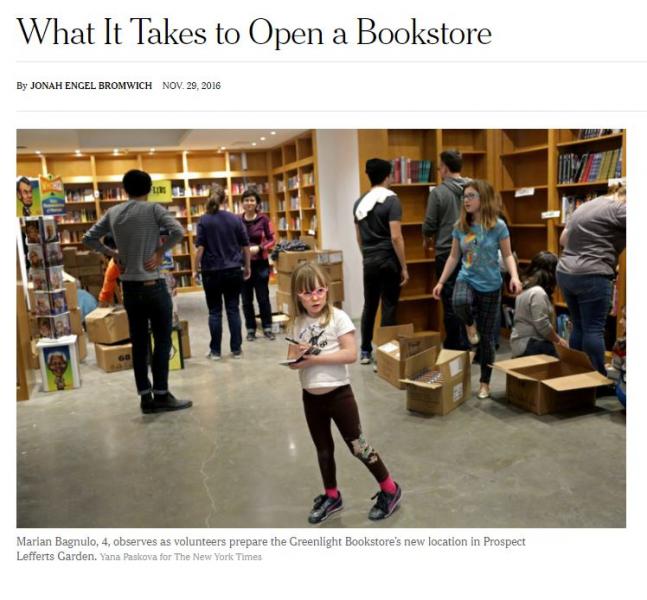 "You Can Shelve Books at Greenlight's New Store to Help It Open This Weekend" (DNAinfo, November 21, 2016)

"5 Reasons Why Independent NYC Bookstores Are Doing Better Than You Think" (DNAinfo, November 12, 2015)

"The Curious Persistence of Poetry Shops" (The New Yorker, November 7, 2015) 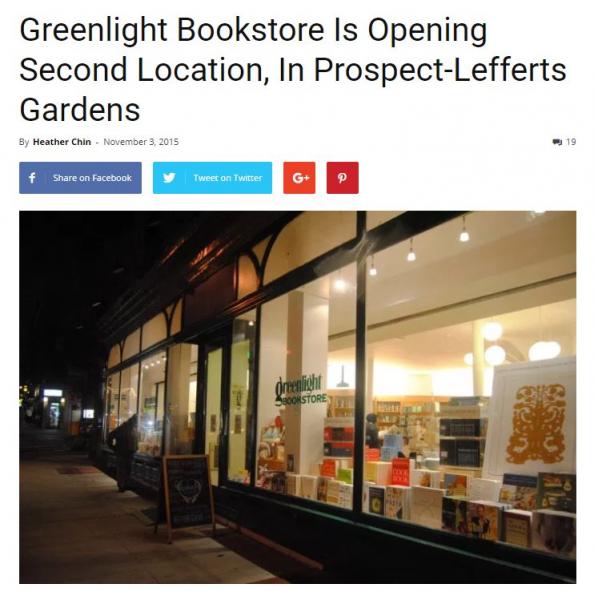 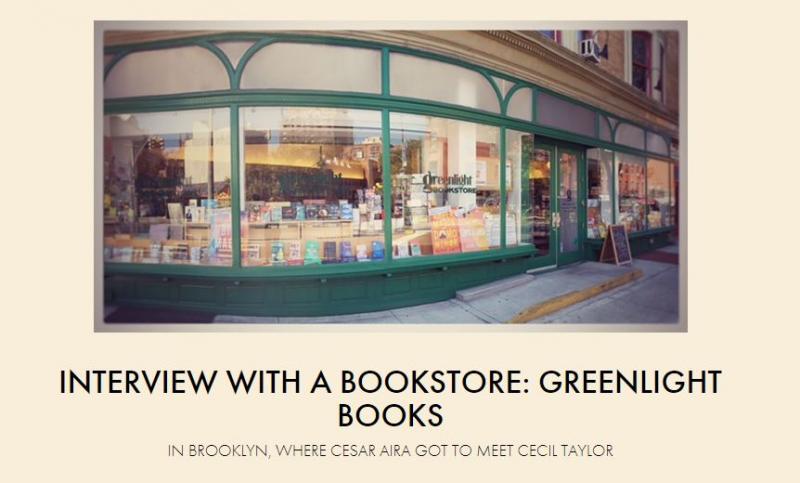 Greenlight Books has quickly become recognized for its innovation by authors and publishers alike, allowing them to bring great authors to the borough and highlighting some of its talented residents. Their close connection to the neighborhood also allows them to work with local businesses and organizations to create a thriving community.

"Indie Bookstores Are Finally Not Dying" (The Daily Beast, May 2015)

"6 Independent Bookstores That Are Thriving -- and How They Do It" (New York Magazine, Daily Intelligencer, April 13, 2014)

"Book Discussion The News: A User's Manual—Alain de Botton talked about his book, The News: A User’s Manual, in which he looks at the way the news media shapes the way we think about politics, tragedy, crime, and celebrity" (C-SPAN2 BookTV, March 3, 2014, video) 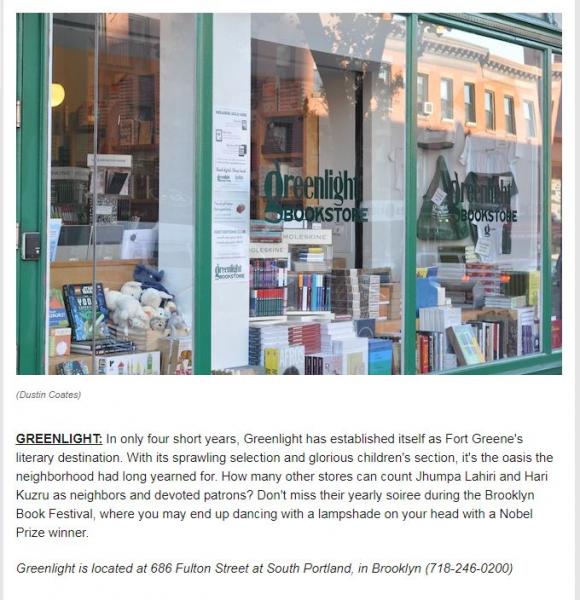 "Some of My Best Friends Are Black—Tanner Colby presents his thoughts on the social, economic, and political factors, which according to the author have obstructed integration in America" (C-SPAN2 BookTV, July 10, 2012, video)

"What Slate doesn't get about independent bookstores" (Salon, December 15, 2011)

At a time when huge bookstore chains are shuttering, when independently run stores of all stripes are struggling, and when even long-lasting brick-and-mortar establishments feel threatened by online shopping, Greenlight is expanding.

"How to Do Well and Do Good: Invest in Local Businesses" (video segment on AOL's Daily Finance, July 25, 2011)

"I’ve already come to think of Greenlight as an extension of my home. Everyone knew Fort Greene needed a bookstore, but I don’t think anyone dreamed it would be as perfect a place as this. — author Jhumpa Lahiri

"Bookstores We Love For Their Spirit of Independence" (Huffington Post, July 1, 2010) 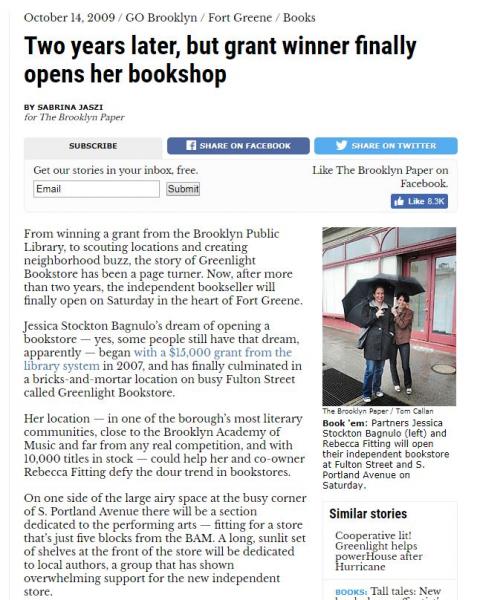 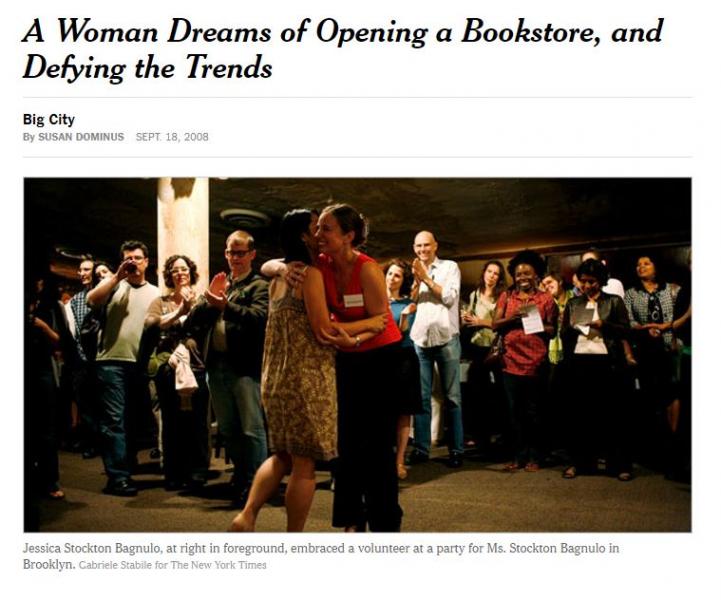 "A Woman Dreams of Opening a Bookstore, and Defying the Trends" (New York Times, September 18, 2008)