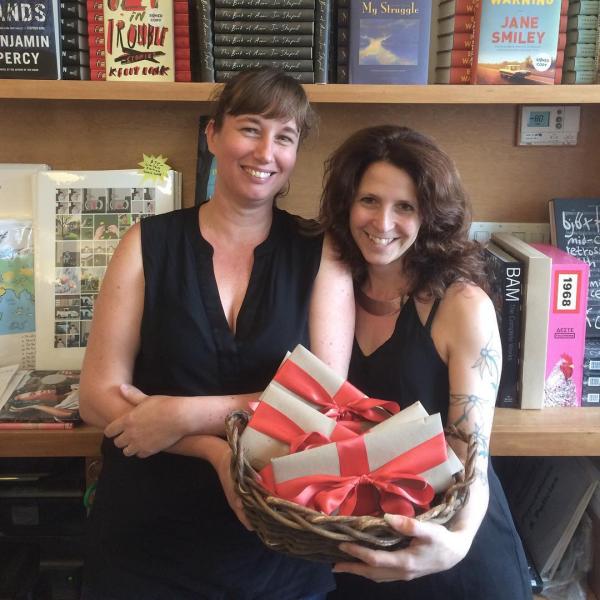 Founded in October 2009 by Rebecca Fitting and Jessica Stockton Bagnulo, Greenlight Bookstore is a general independent bookstore in Brooklyn, New York.  Greenlight has grown from its original store in historic Fort Greene to encompass two bookstore spaces, a sister stationery store, kiosks at partner cultural institutions, and pop-up locations at events throughout the city. Through knowledgeable staff, curated book selection, community partnerships, and a robust e-commerce website, Greenlight combines the best traditions of the neighborhood bookstore with a forward-looking sensibility. Its beautiful bookstore spaces on Fulton Street and Flatbush Avenue and its carefully curated, community-minded events have earned Greenlight a reputation as a literary destination. Greenlight has garnered local, national, and international press coverage for its innovative startup model and its continuing success.

Greenlight continues to serve its community during the COVID-19 pandemic with virtual events, increased ecommerce and pickup options, and modified shopping hours, and has been inspired by the movements for racial justice across the country to engage in the work of becoming a more anti-racist company.

See below for a full timeline of the Greenlight story!

The story of Greenlight Bookstore is one of passion, and most importantly, community.  The timeline below outlines some of the big moments in the bookstore’s creation and growth, and the new stories of Greenlight are still being written in our stores and around the city every day.

From our beginnings in 2009 with an award-winning business plan, an innovative funding model, and incredible support from our Brooklyn neighborhood, to our partnership with the Brooklyn Academy of Music and other institutions, through growth in ecommerce, offsite book sales and school partnerships, to the opening of our second location in 2016, to the navigation of a worldwide pandemic as a small business, Greenlight continues to strive to serve our customers, our employees, and our community. Offering a space for conversations and encounters, and a welcome for readers of every kind, Greenlight is an independent bookstore in the heart of Brooklyn.

1993 – 2008: Jessica Stockton Bagnulo and Rebecca Fitting separately learn the book business, working at major publishers including Random House and Penguin, and in bookstores including Borders, Book Culture, Deliberate Literate, McNally Jackson, and Three Lives & Company. Together, they have a total of twenty-five years of industry experience as of 2008 (though both are under 40).

January 2008: Jessica’s bookstore business plan wins the grand prize in the Brooklyn Business Library’s Power Up! business plan competition, winning $15,000 and the attention of media and local communities.  Based on years of discussion with fellow booksellers and mentoring from the American Booksellers Association, the business plan represents a vision for what a Brooklyn bookstore could be, created with enormous support from the bookselling community.

Spring–Summer 2008: Jessica and Rebecca start discussions after chatting about the bookstore at an author dinner, and ultimately form a partnership based on their shared passion for opening a forward-thinking brick & mortar independent bookstore as well as their complementary skills.  Around the same time, the Fort Greene Association contacts them about bringing a bookstore to their fast-changing Brooklyn neighborhood, motivated by a neighborhood survey which reveals a bookstore is the #1 new business desired by neighborhood residents.

September 2008:  Over 300 people attend the bookstore’s pre-launch party at the Brooklyn Academy of Music (BAM), which is covered in the New York Times. Jessica and Rebecca announce their partnership and the store’s name, as well as launching the Community Lender Program, in which individuals from the community provide loans for the store’s startup expenses. Over $70,000 of the bookstore’s startup capital ultimately comes from community lenders

Spring–Summer 2009: Greenlight is connected via neighborhood contacts to IBEC Living, owners of the historic building at 686 Fulton Street in Fort Greene, and ultimately signs a lease for the building’s 2,000 square foot storefront space (formerly an insurance company and the headquarters for Black Veterans for Social Justice, among other uses).  Working with deFT Projects (later Frederick Tang Architecture and artisan woodworker Iris Lasn they plan the design and begin the buildout.  Construction begins in June and continues throughout the summer and early fall, aided by the community of neighbors, book industry colleagues, friends and family who clean, scrape, paint, stain shelves, and check in and sort books.

October 16, 2009: Greenlight sells its first book, for exact change, in cash, and upon completion of this sale, Jessica and Rebecca realize Greenlight has opened for business.

October 24, 2009: Greenlight hosts its official launch party on a rainy night, with a crowd of hundreds, which spill out onto the sidewalk.  Attendees include representatives from the City Council and the Brooklyn Borough President’s office.

Fall 2011: Greenlight becomes the official vendor of the Brooklyn Academy of Music (BAM), opening kiosk locations at the BAM Opera House and BAM Harvey Theater.  The partnership with BAM ultimately grows into its own department at Greenlight.

Fall 2012: Greenlight begins partnering with BAM to create the Unbound literary series. The series has gone on to host book launches for authors including John Cleese, Elvis Costello, Lena Dunham, and Neil Gaiman, among many others.

Fall 2013: Greenlight launches its First Editions Club, offering subscribers bookseller-selected and author-autographed first edition hardcover books each month. Many of Greenlight’s FEC selections have gone on to win major literary awards, and the program continues to grow with new subscribers each month.

Fall 2013: Greenlight (along with other independent bookstores) begins offering Kobo ebooks through its website, later adding digital audiobooks through Libro, to give customers increased options for reading formats while shopping local.

2013-2014: Greenlight expands its partnerships with area schools, bringing successful book fairs and author visits to several dozen public, private and charter schools throughout Brooklyn.  The store’s school partnership program continues to develop with dozens of partner schools and numerous book fairs and school author visits annually.  The offsite and school sales department ultimately grows into its own department at Greenlight.

Summer 2014: Greenlight launches a free podcast showcasing great author events in the store and at offsite venues.  Episodes include conversations with Elizabeth Gilbert, Khaled Hosseini, David Mitchell, Ann Patchett, and many others.

October 2014: Greenlight celebrates its five-year anniversary, and pays off its small business startup loans to the World Trade Center Small Business Recovery Fund and all of its Community Lenders, becoming fully debt-free.

Fall 2015: Greenlight is connected with developer Hudson Inc. who are in the process of building the brand-new Parkline building on Flatbush Avenue.  Greenlight ultimately signs a lease for a 2,000 square foot storefront space at 632 Flatbush Avenue, and announces plans for its second location.

Spring-Summer 2016: Working again with architects Fred Tang & Associates, Greenlight designs and builds out the new store space. Greenlight also re-launches its Community Lender program to raise funds for the second location, ultimately securing over $250K from nearly 100 lenders in the neighborhood and beyond.

Fall 2016: Determined to open before the holiday season, Greenlight recruits volunteers to help shelve books as work on the space is being completed; the neighborhood literally puts the books on the shelves of its own bookstore.  The volunteers’ efforts, as well as the startup process, are covered in the New York Times.

November 26, 2016: The Prospect Lefferts Gardens store opens its doors to customers, on the Saturday of Thanksgiving weekend.

January 7, 2017: Greenlight hosts the new store’s launch party on a snowy night, with another capacity crowd and attendees including representatives from the American Booksellers Association, the Brooklyn Chamber of Commerce, the Borough President’s office, the City Council, and New York State and Federal congressional offices.

Summer 2017: Greenlight launches its Civic Engagement Series to provide space for conversation and tools for change about issues relevant to the community.

Fall 2017: Greenlight hosts a book signing for 1,000 with Hillary Rodham Clinton in its Fort Greene store, and partners with the Kings Theatre to host a conversation with author Ta-Nehisi Coates in front of a sold out crowd of 3,000.

October 2018: Greenlight’s owners launch a side project, Yours Truly, Brooklyn, an independent stationery store on Fulton Street next to the original bookstore location.

March 2020: Like small businesses across the city and the world, Greenlight closes its doors in response to the COVID-19 pandemic.  Events programming is quickly moved to virtual, and orders are fulfilled through the ecommerce website for shipping.

July 2020: Greenlight reopens its doors for shopping and pickup, with increased safety procedures in place.

Check out the Press page for more of the Greenlight Bookstore story.