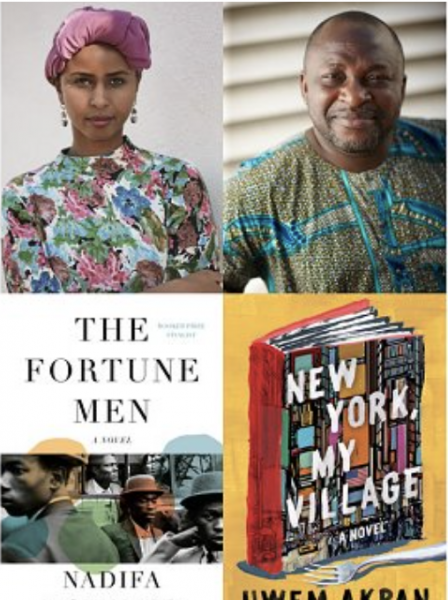 For Brooklyn Public Library's International Writers series, join Nadifa Mohamed, author of The Fortune Men, and Uwem Akpan, author of New York, My Village, as they discuss their new novels with Anderson Tepper.

What are the consequences of insularity and tribalism, whether in a 1950s seaside community in Wales or contemporary New York City? And how is literature able to explore these issues of outsiderness—with gravity, insight, even satire—in both the past and present? Nadifa Mohamed’s Booker-shortlisted novel, The Fortune Men, is grounded in the real-life story of a Somali sailor executed for a crime he didn’t commit in Cardiff, Wales in 1952. While Uwem Akpan’s New York, My Village, follows a visiting Nigerian scholar of the Biafran War as he navigates the liberal pretensions of the New York publishing world and the city itself.

Nadifa Mohamed is the author of Black Mamba Boy and The Orchard of Lost Souls. She has received both The Betty Trask Award and the Somerset Maugham Award, and in 2013 was named as one of Granta’s Best of Young British Novelists.

Uwem Akpan’s debut book of stories, Say You’re One of Them, won the Commonwealth Writers’ Prize and the PEN Open Book Award, and was picked by the Oprah Winfrey Book Club. He teaches creative writing at the University of Florida, Gainesville.

Anderson Tepper is co-chair of the International Committee of the Brooklyn Book Festival and has written for The New York Times Book Review, Vanity Fair, World Literature Today, and Words without Borders, among other publications.

Click here to register for this event on BPL's webpage!

The Fortune Men: A novel (Hardcover)

“Heart-wrenching. . . . This powerful, deeply affecting exploration of mid-twentieth-century racism and other forms of prejudice has stark relevance today.”—Booklist

“A novel on fire, a restitution of justice in prose . . . The Fortune Men can be read as a comment on 21st-century Britain and its continued troubled legacy of empire, but also as a beautifully judged fiction in its own right—teeming with life, character and humour, and, particularly, evocative of place.”—Catherine Taylor, Financial Times

A searing sendup of publishing, racial biases, and humanity's near-infinite capability to look away from the most troubling parts of ourselves, New York, My Village is that rare thing: a funhouse mirror that reflects back the truth. Uwem Akpan's debut novel maps the constantly shifting ground of grappling with prejudice and guilt—and how we might find connections, and compassion, nevertheless.

I am in awe. I'm still trying to figure out how Uwem Akpan did it. He has transformed the isolating and exhausting intricacies of war trauma into a compulsively readable novel, at once hilarious, utterly harrowing, profoundly optimistic, and horrifically informative. Unforgettable characters, deeply realistic and “relatable” interpersonal conflicts, a contagious love of life, fresh insights into the crazy-making properties of racist ideology: New York, My Village has it all. And it's the great bedbug novel of New York City we have all been waiting for, some of us without knowing it! I adored this book.

— Elif Batuman, Pulitzer Prize finalist and author of The Idiot