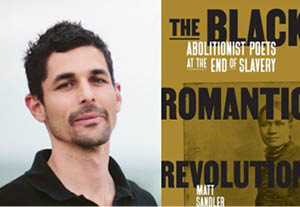 During the pitched battle over slavery in the United States, Black writers—enslaved and free—allied themselves with the cause of abolition and used their art to advocate for emancipation and to envision the end of slavery as a world-historical moment of possibility.

These Black writers borrowed from the European tradition of Romanticism—lyric poetry, prophetic visions--to write, speak, and sing their hopes for what freedom might mean. At the same time, they voiced anxieties about the expansion of global capital and US imperial power in the aftermath of slavery. They also focused on the ramifications of slavery's sexual violence. Authors like Frances Ellen Watkins Harper, George Moses Horton, Albery Allson Whitman, and Joshua McCarter Simpson conceived the Civil War as a revolutionary upheaval on par with Europe's stormy Age of Revolutions. The Black Romantic Revolution proposes that the Black Romantics' cultural innovations have shaped Black radical culture to this day, from the blues and hip hop to Black nationalism and Black feminism. Their expressions of love and rage, grief and determination, dreams and nightmares, still echo into our present.

​Matt Sandler is Program Director of the M.A. in American Studies at Columbia University's Center for the Study of Ethnicity and Race. He specializes in American and African American poetry. Before returning to Columbia, he taught at Louisiana State University, Gettysburg College, and the University of Oregon. His work has appeared in Callaloo, African American Review, Comparative Literature, Twentieth Century Literature, Atlantic Studies, the Journal of American Studies, and the L.A. Review of Books, as well as a number of anthologies.

Sandler will be in conversation with Honorée Fanonne Jeffers. Jeffers is a poet, fiction writer, and essayist. Her first novel, The Love Songs of W.E.B. Du Bois, is forthcoming from Harper in 2021; in addition, she’s the author of five books of poetry, most recently, The Age of Phillis (Wesleyan, 2020), based upon fifteen years of research on the life and times of Phillis Wheatley Peters, a formerly enslaved person who was the first African American woman to publish a book. Jeffers’s creative work has appeared in Angles of Ascent: A Norton Anthology of Contemporary African American Poetry (Norton 2013), Black Renaissance Noire, Common-Place: The Journal of Early American Life, The Fire This Time: A New Generation Speaks About Race (Scribner 2016), The Kenyon Review, and Virginia Quarterly Review, among others.  She is the recipient of fellowships from the American Antiquarian Society, the Aspen Summer Words Conference, the National Endowment for the Arts, the Witter Bynner Foundation through the Library of Congress, and she has been honored with two lifetime achievement notations, the Harper Lee Award for Literary Distinction, and induction into the Alabama Writers Hall of Fame. Jeffers is Critic-at-Large for The Kenyon Review and Professor of English at University of Oklahoma.

The Black Romantic Revolution: Abolitionist Poets at the End of Slavery (Paperback)

“Written with deep and layered seriousness, and a healthy willingness to provoke and play, this impressive study reads Black poetry as profoundly political and as exceeding politics. Subtly theorized, especially via Black feminist theory, and attentive to changing imperatives of political coalition building, it nevertheless keeps the poets and the poetry front and center. The old surrealist insistence that poetry can be an emancipatory and creative activity emerges here not as an injunction but as one central aspect of lived history.”
—David Roediger, author of How Race Survived US History

“With uncommon verve, Matt Sandler correlates Romantic poetic idioms from the natural world regarding whirlwinds and the coming storm to those about revolution and the impending crisis from the political world. The Black Romantic Revolution has as a latent question what happens to our understanding of the long nineteenth-century when re-read through the optics of African American literary studies, historical poetics, and Romanticism. Sandler not only illustrates how African American poets extended the temporal and thematic scope of Romanticism but also how black American poets came to fulfill its political yearnings and aesthetic apotheosis. In so doing, Sandler offers a trenchant critique of, and necessary corrective to, the disciplinary formations that have heretofore failed to put into clearer view the shared horizons between ‘African American’ and ‘Romanticism.’”
—Ivy G. Wilson, author of Specters of Democracy: Blackness and the Aesthetics of Nationalism