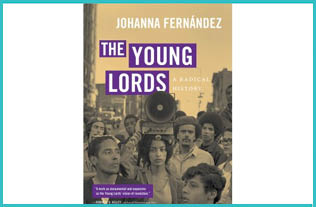 Join us for a Zoom discussion of The Young Lords with Johanna Fernández. Against the backdrop of America’s escalating urban rebellions in the 1960s, an unexpected cohort of New York radicals unleashed a series of urban guerrilla actions against the city’s racist policies and contempt for the poor. Their dramatic flair, uncompromising vision, and skillful ability to link local problems to international crises riveted the media, alarmed New York’s political class, and challenged nationwide perceptions of civil rights and black power protest. The group called itself the Young Lords.

Utilizing oral histories, archival records, and an enormous cache of police records released only after a decade-long Freedom of Information Law request and subsequent court battle, Johanna Fernández has written the definitive account of the Young Lords, from their roots as a street gang to their rise and fall as a political organization. Led predominantly by poor and working-class Puerto Rican youth, and consciously fashioned after the Black Panther Party, the Young Lords confronted race and class inequality and questioned American foreign policy. Their imaginative, irreverent protests and media conscious tactics won significant reforms and exposed U.S. mainland audiences to the country’s quiet imperial project in Puerto Rico. In riveting style, Fernández demonstrates how the Young Lords redefined the character of protest, the color of politics, and the cadence of popular urban culture in the age of great dreams.

Registered audience members will receive a Zoom link from BPL prior to the event.

"In this remarkable book, historian Johanna Fernández tells us that the children of Puerto Rican migration to the U.S. colonizer’s continent developed a ‘second sight,’ experiencing poverty and discrimination while possessing knowledge of Puerto Rico as a U.S. colony and U.S. imperialism, making their organization, the Young Lords, a powerful force. Challenging Latino antiblack racism and machismo and the church, and using intense community organizing, they not only brought liberation and class consciousness to Puerto Ricans but also infused the social movements of the 1960s with solidarity, launching the famed Rainbow Coalition. This is history writing at its best, rigorously researched yet powerful and moving, often poetic. And it is not ‘just history,’ but rather profoundly a cautionary tale of the present and the future given the limitation of social revolution within the powerful settler-colonial state that is the United States."--Roxanne Dunbar-Ortiz, author of An Indigenous Peoples’ History of the United States

"Johanna Fernández has not only produced the definitive history of the Young Lords; she also has single-handedly shifted our understanding of the post-1968 political landscape. Richly documented, beautifully written, and brutally honest, this book moves the Young Lords from the margins of the New Left and Puerto Rican nationalism to the very epicenter of global struggles against racism, imperialism, and patriarchy and for national self-determination, medical justice, reproductive rights, and socialism. A work as monumental and expansive as the Young Lords’ vision of revolution."--Robin D. G. Kelley, author of Hammer and Hoe: Alabama Communists during the Great Depression