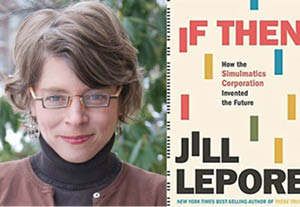 Jill Lepore presents If Then

In discussion with danah boyd

The Simulmatics Corporation, launched during the Cold War, mined data, targeted voters, manipulated consumers, destabilized politics, and disordered knowledge―decades before Facebook, Google, and Cambridge Analytica. Jill Lepore, best-selling author of These Truths, came across the company’s papers in MIT’s archives and set out to tell this forgotten history, the long-lost backstory to the methods, and the arrogance, of Silicon Valley.

Founded in 1959 by some of the nation’s leading social scientists―“the best and the brightest, fatally brilliant, Icaruses with wings of feathers and wax, flying to the sun”―Simulmatics proposed to predict and manipulate the future by way of the computer simulation of human behavior. In summers, with their wives and children in tow, the company’s scientists met on the beach in Long Island under a geodesic, honeycombed dome, where they built a “People Machine” that aimed to model everything from buying a dishwasher to counterinsurgency to casting a vote. Deploying their “People Machine” from New York, Washington, Cambridge, and even Saigon, Simulmatics’ clients included the John F. Kennedy presidential campaign, the New York Times, the Department of Defense, and others: Simulmatics had a hand in everything from political races to the Vietnam War to the Johnson administration’s ill-fated attempt to predict race riots. The scientists of Simulmatics believed they had invented “the A-bomb of the social sciences.” They did not predict that it would take decades to detonate, like a long-buried grenade. But, in the early years of the twenty-first century, that bomb did detonate, creating a world in which corporations collect data and model behavior and target messages about the most ordinary of decisions, leaving people all over the world, long before the global pandemic, crushed by feelings of helplessness. This history has a past; If Then is its cautionary tale.

Lepore will be in conversation with danah boyd. boyd is the founder and president of Data & Society, a partner researcher at Microsoft Research, and a visiting professor at New York University. Her research is focused on making certain that society has a nuanced understanding of the relationship between technology and society, especially as issues of inequity and bias emerge. She is the author of It’s Complicated: The Social Lives of Networked Teens, and has authored or co-authored numerous books, articles, and essays. She is a trustee of the National Museum of the American Indian, a director of the Social Science Research Council, and a director of Crisis Text Line. She has been recognized by numerous organizations, including receiving the Electronic Frontier Foundation’s Pioneer/Barlow Award and being selected as a 2011 Young Global Leader of the World Economic Forum. Originally trained in computer science before retraining under anthropologists, danah has a Ph.D. from the University of California at Berkeley’s School of Information.

If Then: How the Simulmatics Corporation Invented the Future (Hardcover)

"A staff writer for the New Yorker and Harvard professor, Lepore knows how to spin out a winning historical study. Here, she dives deep into matters that have seldom attracted scholarly attention. . . As Lepore convincingly demonstrates, the work of Simulmatics paved the way for later manipulators of psychology and public opinion such as Facebook. . . . A fascinating, expertly guided exploration of a little-known corner of the recent past.

[Lepore] pulls no punches in criticizing the folly of trying to understand human behavior via algorithm, and the corrosive consequences of trying to hack democracy. The result is . . . a perceptive work of historically informed dissent." —Brendan Driscoll, Booklist [starred review]

"A person can’t help but feel inspired by the riveting intelligence and joyful curiosity of Jill Lepore. Knowing that there is a mind like hers in the world is a hope-inducing thing." —George Saunders

"Everything Jill Lepore writes is distinguished by intelligence, eloquence, and fresh insight. If Then is that, and even more: It’s absolutely fascinating, excavating a piece of little-known American corporate history that reveals a huge amount about the way we live today and the companies that define the modern era." — Susan Orlean, author of The Library Book