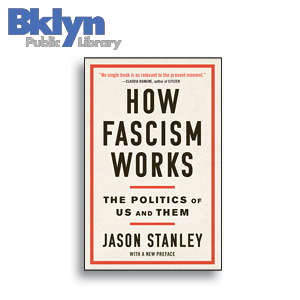 Join author Jason Stanley as he discusses his book How Fascism Works in a virtual book discussion. Stanley will be in conversation with Jonathan Metzl.

As the child of refugees of World War II Europe and a renowned philosopher and scholar of propaganda, Jason Stanley has a deep understanding of how democratic societies can be vulnerable to fascism: Nations don’t have to be fascist to suffer from fascist politics. In fact, fascism’s roots have been present in the United States for more than a century. Alarmed by the pervasive rise of fascist tactics both at home and around the globe, Stanley focuses here on the structures that unite them, laying out and analyzing the ten pillars of fascist politics—the language and beliefs that separate people into an “us” and a “them.”

Jason Stanley is the Jacob Urowsky Professor of Philosophy at Yale University. He is the author of five books, including How Propaganda Works, winner of the Prose Award in Philosophy from the Association of American Publishers, and How Fascism Works: The Politics of Us and Them, about which Citizen author Claudia Rankine states: “No single book is as relevant to our present moment.” Stanley serves on the board of the Prison Policy Initiative and writes frequently about propaganda, free speech, mass incarceration, democracy, and authoritarianism for The New York Times, The Washington Post, Boston Review, The Chronicle of Higher Education, and The Guardian.

Jonathan Metzl is the Frederick B. Rentschler II Professor of Sociology and Psychiatry, and the Director of the Center for Medicine, Health, and Society, at Vanderbilt University in Nashville, Tennessee. He received his MD from the University of Missouri, MA in humanities/poetics and Psychiatric internship/residency from Stanford University, and PhD in American Culture from University of Michigan. A 2008 Guggenheim fellow, Professor Metzl has written extensively for medical, psychiatric, and popular publications. His books include Dying of Whiteness, The Protest Psychosis, Prozac on the Couch, and Against Health: How Health Became the New Morality.

Register for this event on Brookly Public Library's page!

How Fascism Works: The Politics of Us and Them (Paperback)

“No single book is as relevant to the present moment.”—Claudia Rankine, author of Citizen

“One of the defining books of the decade.”—Elizabeth Hinton, author of From the War on Poverty to the War on Crime

“A vital read for a nation under Trump.”­—The Guardian

“With unsettling insight and disturbing clarity, How Fascism Works is an essential guidebook to our current national dilemma of democracy vs. authoritarianism.”—William Jelani Cobb, author of The Substance of Hope

Dying of Whiteness: How the Politics of Racial Resentment Is Killing America's Heartland (Paperback)

A physician's "remarkable" account of how right-wing backlash policies have mortal consequences (Minneapolis Star Tribune) -- even for the white voters they promise to help.