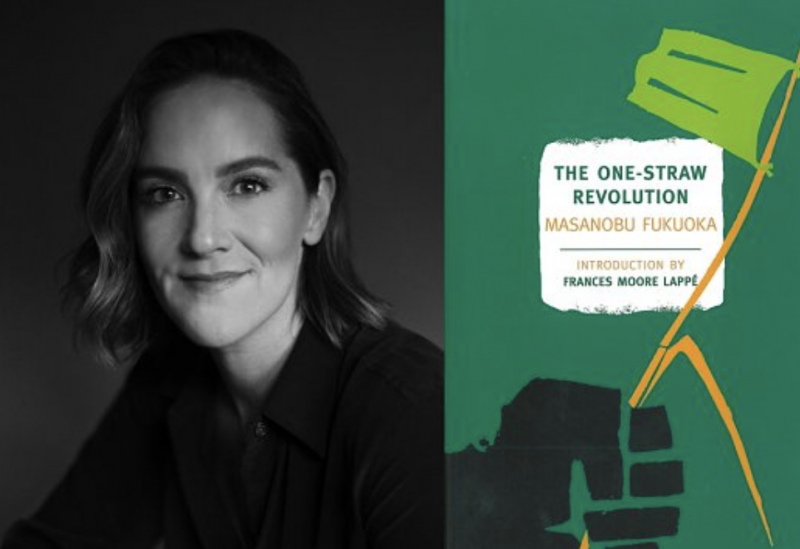 For the February Climate Reads, curated and co-presented by Writers Rebel NYC, journalist Amanda Little leads a discussion of Masanobu Fukuoka’s The One-Straw Revolution: An Introduction to Natural Farming. Also joining the panel are Jess Turner and Will Harris.

Call it “Zen and the Art of Farming” or a “Little Green Book” Masanobu Fukuoka’s manifesto about farming, eating, and the limits of human knowledge presents a radical challenge to the global systems we rely on for our food. At the same time, it is a spiritual memoir of a man whose innovative system of cultivating the earth reflects a deep faith in the wholeness and balance of the natural world. As Wendell Berry writes in his preface, the book “is valuable to us because it is at once practical and philosophical. It is an inspiring, necessary book about agriculture because it is not just about agriculture.”

Trained as a scientist, Fukuoka rejected both modern agribusiness and centuries of agricultural lore. Over the next three decades he perfected his so-called “do-nothing” technique: commonsense, sustainable practices that all but eliminate the use of pesticides, fertilizer, tillage, and perhaps most significantly, wasteful effort.

Whether you’re a guerrilla gardener or a kitchen gardener, dedicated to slow food or simply looking to live a healthier life, you will find something here—you may even be moved to start a revolution of your own.

Our host: Amanda Little is a professor of journalism and science writing at Vanderbilt University. She's the author of The Fate of Food: What We'll Eat in a Bigger, Hotter, Smarter World, a five-year adventure into the lands, minds, and machines shaping the future of sustainable food. She has a particular fondness for far-flung and hard-to-stomach reporting that takes her to ultradeep oil rigs, down manholes, into sewage plants, and inside monsoon clouds. She has written about energy, technology, and the environment for The New York Times, The Washington Post, Bloomberg, Wired, Rolling Stone, and NewYorker.com. She has interviewed politically diverse figures, like Barack Obama and Lindsey Graham, and has been interviewed by journalists including Terry Gross and Fareed Zakaria. Her recent TED Talk, "Climate change is a problem you can taste," has more than 1M views.

Will Harris is a fourth-generation cattleman, who tends the same land that his great-grandfather settled in 1866. Born and raised at White Oak Pastures, Will left home to attend the University of Georgia's School of Agriculture, where he was trained in the industrial farming methods that had taken hold after World War II. Will graduated in 1976 and returned to Bluffton where he and his father continued to raise cattle using pesticides, herbicides, hormones, and antibiotics. They also fed their herd a high-carbohydrate diet of corn and soy. These tools did a fantastic job of taking the cost out of the system, but in the mid-1990s Will became disenchanted with the excesses of these industrialized methods. They had created a monoculture for their cattle, and, as Will says, "nature abhors a monoculture." In 1995, Will made the audacious decision to return to the farming methods his great-grandfather had used 130 years before. Since Will has successfully implemented these changes, he has been recognized all over the world as a leader in humane animal husbandry and environmental sustainability. Will is the immediate past President of the Board of Directors of Georgia Organics. He is the Beef Director of the American Grassfed Association and was selected 2011 Business Person of the year for Georgia by the Small Business Administration.

The One-Straw Revolution: An Introduction to Natural Farming (Paperback)