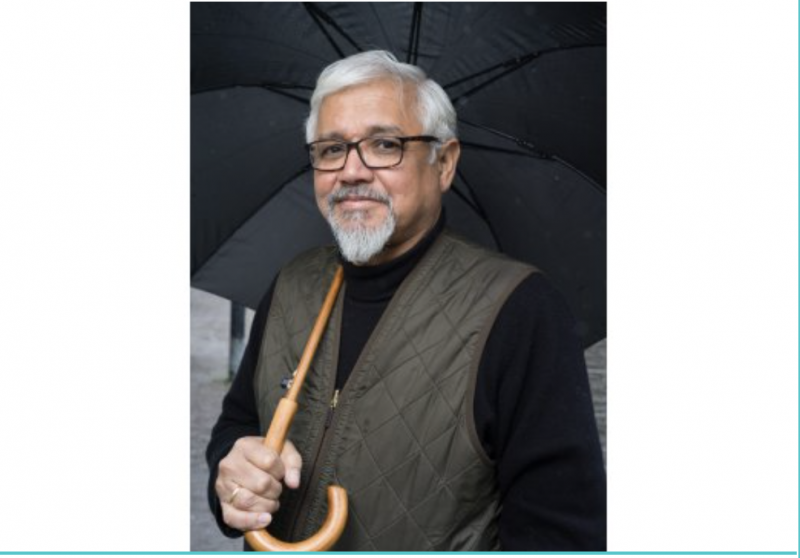 The 2021 Kahn Humanities lecture presents Amitav Ghosh, whose novels and nonfiction offer a window into the roles that climate science and storytelling, colonialism and history play in our prospects for survival.

The Kahn Humanities lecture series at Brooklyn Public Library features innovative thinkers in the humanities or whose work effectively draws on the humanities. BPL Presents, the library's arts & culture department, is proud to feature the unique mind and urgent voice of Amitav Ghosh, whose work increasingly zeroes in on the interrelations between history, the humanities, storytelling, and the question of our "great derangement" before an impending climate disaster.

Amitav Ghosh was born in Calcutta and grew up in India, Bangladesh and Sri Lanka. He studied in Delhi, Oxford and Alexandria and is the author of The Circle of Reason, The Shadow Lines, In An Antique Land, Dancing in Cambodia, The Calcutta Chromosome, The Glass Palace, The Hungry Tide, and The Ibis Trilogy, consisting of Sea of Poppies, River of Smoke and Flood of Fire. The Great Derangement; Climate Change and the Unthinkable, a work of non-fiction, appeared in 2016. Gun Island, was released in September 2019. Ghosh’s first-ever book in verse, Jungle Nama: A Story of the Sundarban, was published February 2021. His latest book, The Nutmeg’s Curse: Parables for a Planet in Crisis, was just released.

The Circle of Reason was awarded France’s Prix Médicis in 1990, and The Shadow Lines won two prestigious Indian prizes the same year, the Sahitya Akademi Award and the Ananda Puraskar. The Calcutta Chromosome won the Arthur C. Clarke award for 1997 and The Glass Palace won the International e-Book Award at the Frankfurt book fair in 2001. In January 2005 The Hungry Tide was awarded the Crossword Book Prize, a major Indian award. His novel, Sea of Poppies (2008) was shortlisted for the Man Booker Prize, 2008 and was awarded the Crossword Book Prize and the India Plaza Golden Quill Award.

Amitav Ghosh's work has been translated into more than thirty languages and he has served on the juries of the Locarno and Venice film festivals. His essays have appeared in The New Yorker, The New Republic and The New York Times. They have been anthologized under the titles The Imam and the Indian (Penguin Random House India) and Incendiary Circumstances (Houghton Mifflin, USA). The Great Derangement: Climate Change and the Unthinkable was given the inaugural Utah Award for the Environmental Humanities in 2018.

Ghosh holds two Lifetime Achievement awards and four honorary doctorates. In 2007 he was awarded the Padma Shri, one of India's highest honors, by the President of India. In 2010 he was a joint winner, along with Margaret Atwood, of a Dan David prize, and in 2011 he was awarded the Grand Prix of the Blue Metropolis festival in Montreal. In 2018 the Jnanpith Award, India’s highest literary honor, was conferred on Amitav Ghosh. He was the first English-language writer to receive the award. In 2019 Foreign Policy magazine named him one of the most important global thinkers of the preceding decade.

Click here to register for this event on BPL's webpage!

The Nutmeg's Curse: Parables for a Planet in Crisis (Hardcover)

"Illuminating. . . . [Ghosh] wants us to reckon with broader structures of power, involving 'the physical subjugation of people and territory,' and, crucially, the 'idea of conquest, as a process of extraction.' The world-as-resource perspective not only depletes our environment of the raw materials we seek; it ultimately depletes it of meaning."
— New Yorker

"The interesting contribution of this book . . . is his indictment of the culture-makers. It has become unfashionable to seem too concerned. To make climate change the theme or setting of a novel, Ghosh writes, is 'to court eviction from the mansion in which serious fiction has long been in residence.' His bigger point is that we need a change of narrative. But to do this means that those who make our narratives need to lead the way, to bring their talents of storytelling to bear on what is, he writes, no less than an 'existential danger.'”
— New York Times

"Gun Island deals with two of the biggest issues of the current moment: climate change and human migration. The confidence with which he shapes a good, old-fashioned diversion around these particular poles is instructive. . . . That Ghosh is able to sustain the book’s momentum when its primary inquiry is so cerebral is no mean feat... Gun Island is a novel for our times." --Rumaan Alam, The Washington Post

The Hungry Tide: A Novel (Paperback)

The Calcutta Chromosome: A Novel of Fevers, Delirium & Discovery (Paperback)