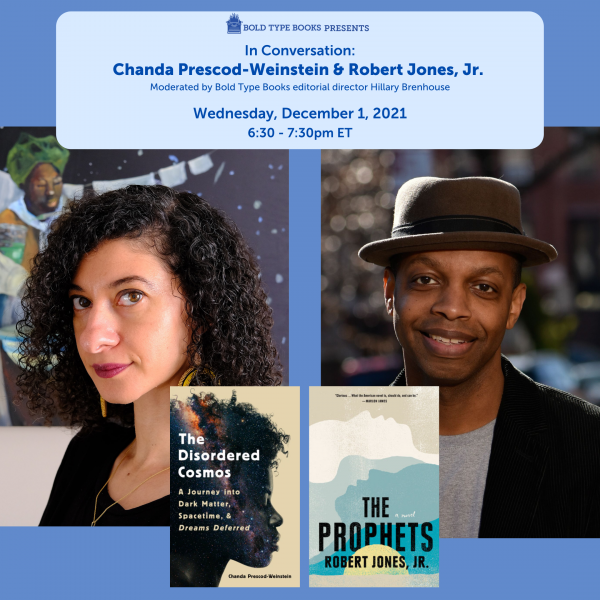 Join Chanda Prescod-Weinstein, author of the Bold Type Books titleThe Disordered Cosmos, and Robert Jones, Jr., author of The Prophets, for a discussion about their books and the world that Chanda's work dreams into existence — one grounded in Black and queer feminist lineages and in which we all have the freedom to know and love the night sky. The event will be moderated by Bold Type Books editorial director Hillary Brenhouse.

Register for this event through Bold Type Books HERE

In The Disordered Cosmos, Dr. Chanda Prescod-Weinstein shares her love for physics, from the physics of melanin in skin to the latest theories of dark matter—along with a perspective informed by history, politics, and the wisdom of Star Trek. One of approximately one hundred Black American women to earn a PhD from a department of physics, she presents a vision of the universe that is vibrant, buoyantly non-traditional, and grounded in Black and queer feminist lineages.

Dr. Prescod-Weinstein urges us to recognize how science, like most fields, is rife with racism, misogyny, and other forms of oppression, and dreams into existence a world in which we all have the freedom to know and love the night sky.

The Prophets is a singular and stunning debut novel about the forbidden union between two enslaved young men on a Deep South plantation, the refuge they find in each other, and a betrayal that threatens their existence.

With a lyricism reminiscent of Toni Morrison, Robert Jones, Jr., fiercely summons the voices of slaver and enslaved alike. As tensions build and the weight of centuries—of ancestors and future generations to come—culminates in a climactic reckoning, The Prophets fearlessly reveals the pain and suffering of inheritance, but is also shot through with hope, beauty, and truth portraying the enormous, heroic power of love.

Chanda Prescod-Weinstein is an assistant professor of physics and astronomy and core faculty in women’s and gender studies at the University of New Hampshire. She is a columnist for New Scientist. Her scientific research focuses on cosmology, neutron stars, and particles beyond the standard model. She divides her time between the New Hampshire Seacoast and Cambridge, Massachusetts.

Robert Jones, Jr., is author of the New York Times instant bestselling novel The Prophets, which was a finalist for the 2021 National Book Award for Fiction. He has written for numerous publications, including The New York Times, Essence, and The Paris Review. He is the creator and curator of the social-justice, social-media community Son of Baldwin, which has over 288,000 followers across platforms.

Hillary Brenhouse joined Bold Type Books this spring as editorial director. Brenhouse was previously the editor-in-chief of Guernica, the award-winning magazine of global art and politics and edited The Guardian’s “Antiracism and America” series. Her writing has appeared in The New Yorker, VICE, TIME, The New York Times, The Oxford American, and elsewhere.

The Disordered Cosmos: A Journey into Dark Matter, Spacetime, and Dreams Deferred (Hardcover)

“A resonant paean to the beauties of the cosmos and a persuasive appeal for solutions to injustices in science.”—Publishers Weekly (starred review)

“In this powerful and compelling book, Prescod-Weinstein lays it out patently: Racist and sexist policies and behaviors are rampant across all scientific disciplines…From the hunt for dark matter (her area of expertise) to the often fraught relationship among Indigenous peoples, their lands, and high-tech experiments, Prescod-Weinstein’s deep dives into complex subjects are accessible and exhilarating... A timely, necessary, stellar book—a game-changer.”—Kirkus Reviews (starred review)

“[An] often lyrical and rebellious love story...Jones seems to be reaching across centuries of blood and memory in an attempt to shake awake a warrior armed with weapon and wit that lies sleeping in his imagined, beloved, Black reader....Jones proves himself an amazing lyricist, pulling poetry out of every image and shift of light....What a fiery kindness that ending, this book. A book I entered hesitantly, cautiously, I exited anew—something in me unloosed, running. May this book cast its spell on all of us, restore to us some memory of our most warrior and softest selves.” –The New York Times Book Review