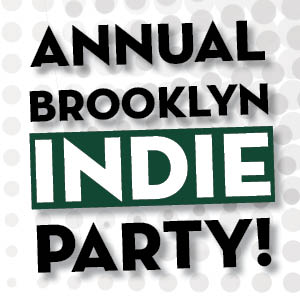 The Brooklyn Book Festival goes virtual this year, and Greenlight’s traditional Brooklyn Indie Party (ten years and counting) must go online as well! On the Friday night before BKBF, Greenlight once again partners with CLMP, as well as some of Brooklyn’s best independent book and magazine publishers, to throw a Brooklyn-sized party celebrating the spirit of literary independence in Brooklyn with an all-star revue! Each of tonight’s presses will have an editor or publisher introducing a featured author, highlighting great indie talents Adam Smyer, Andrea Rosenberg, Stephanie Jean, Matthew Burgess, Kim McLarin, Jenzo DuQue, Megan Cummins, JinJin Xu, Rivka Galchen, Grace Schulman, and Zahra Patterson. All ticket proceeds will be distributed evenly among tonight’s presses, making this a great way to support our beloved Brooklyn indie community while discovering new talents and seeing old friends.  Join us with the drink of your choice in hand to kick off the Brooklyn Book Festival weekend!

Please note: purchase of a book from this list below is NOT equivalent to purchase of a ticket to our October 2 virtual event - but it's another great way to support Brooklyn's independent presses and bookstores!  Click on the "buy tickets" link above to purchase a ticket.

You Can Keep That to Yourself: A Comprehensive List of What Not to Say to Black People, for Well-Intentioned People of Pallor (Hardcover)

Drawing on Walls: A Story of Keith Haring (Hardcover)

If the Body Allows It: Stories (The Raz/Shumaker Prairie Schooner Book Prize in Fiction) (Paperback)

ISBN: 9781496222831
Availability: Not In Store / Available To Order (allow for shipping time to bookstore or direct-to-home)
Published: University of Nebraska Press - September 1st, 2020