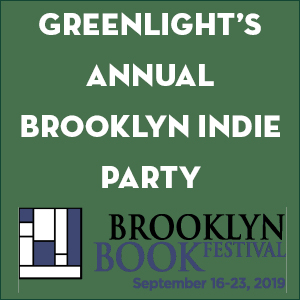 The Brooklyn Book Festival has become one of the premier literary festivals in the country, featuring great authors and publishers from within the borough and around the world. Greenlight is proud to be a vendor at this year’s BKBF, and to participate in the Bookends project: a series of events before and after the Festival to extend the celebration of all things literary throughout the borough. On Friday night, Greenlight once again partners with CLMP, as well as some of Brooklyn’s best independent book and magazine publishers, to throw a Brooklyn-sized party celebrating the spirit of literary independence in Brooklyn with food, drinks and music. Partygoers will mingle with the borough’s great authors and publishers, discover new works, enter for a chance to win a gift bag with a book from each of the featured presses, and kick off the Brooklyn Book Festival weekend!