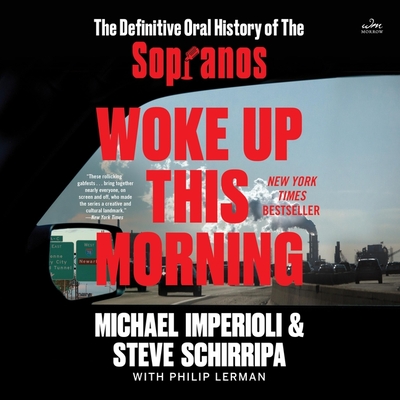 The definitive oral history of the landmark television series and streaming hit The Sopranos, packed with untold stories from behind the scenes and on the set. Stars Michael Imperioli and Steve Schirripa--whose Talking Sopranos podcast has become a sensational fan favorite--talk intimately with virtually everyone who has been involved with the show. And they're ready to spill it all.

Who made the phone call that got HBO to launch The Sopranos? What's the significance of all those eggs? And, what the hell ever happened to the Russian? Michael Imperioli, Steve Schirripa, and the entire cast and crew of The Sopranos have all the answers--and they're revealing where all the bodies are buried.

Inspired by the incredibly successful Talking Sopranos podcast, The Sopranos stars Michael Imperioli (Christopher Moltisanti) and Steve Schirripa (Bobby Baccalieri) will finally reveal all the Soprano family secrets in a surprising, funny, and honest new book. Woke Up This Morning will be the definitive behind-the-scenes history of the groundbreaking HBO series that became a worldwide cultural phenomenon, ushered in a new Golden Age of Television, and to this day continues to be one of the most binged shows of all time.

Expanding on the podcast with exclusive interviews with the cast, crew, producers, writers, directors, and, of course, the series creator David Chase, Michael and Steve will tell all the incredible stories that The Sopranos fans have been waiting to hear for over twenty years. The book will cover the entire history of The Sopranos series from the original concept pitch and casting to the infamous cut to black--and answer many of the thousands of fan questions sent to the podcast, as well as dispel some widely propagated myths and reveal things no one outside the show would even know to ask.