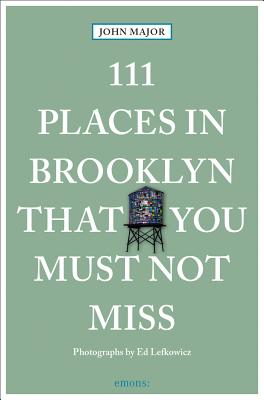 - The ultimate insider's guide to Brooklyn- Features interesting and unusual places not found in traditional travel guides- Part of the international 111 Places/111 Shops series with over 300 titles and 1.8 million copies in print worldwide- Appeals to both the local market (more than 2.5 million people call Brooklyn home) and the tourist market (more than 60 million people visit New York City every year )- Fully illustrated with 111 full-page color photographsIt doesn't take a passport to visit Brooklyn, as some Manhattanites might lead you to believe. Still, Brooklyn can feel a world away. And that's precisely what locals love about it. It's independent. Fiercely headstrong about maintaining its individuality. Tolerant of the different, the foreign, the weird. But what outsiders might be surprised to learn is that Brooklyn is less an undifferentiated mass than a collection of neighborhoods, each with its own distinctive character and history. From Bay Ridge, Bed-Stuy and Bergen Beach to Weeksville, Williamsburg and Windsor Terrace, Brooklyn is a patchwork quilt of communities stitched together with mismatched threads from nearly everywhere in the world. Celebrating its in-your-face diversity, but continually churning those differences into something fresh and unique, Brooklyn embodies a hip and cool version of the American experiment. E pluribus unum - from many comes one. Here are 111 places to start your explorations.

John Major writes about art and culture, especially events and places in Brooklyn, his home for the last twelve years. He is also writing a memoir about life as a stay-at-home father of three managing a divorce and international relocation, uniquely told through pilgrimages to paintings by the Italian artist, Caravaggio. Originally from southern Ohio, John is a dedicated explorer of cities. Among his favourites are London (which he called home for a dozen years), Barcelona, Rome, and Paris. He is determined to never lose the sense of wonder from being a curious explorer, both at home and abroad.Ed Lefkowicz is a commercial, corporate, and editorial photographer. A native New Englander who eventually moved to Brooklyn with his wife Cynthia, he enjoys exploring New York City life in all its storied quirkiness. Never without a camera, he chronicles the cognitive dissonances that color life in the boroughs with his alt website TheQuirkySide.com. As photo editor of Edible Queens magazine, he fancies himself a saveur and may have been the first to introduce the American term "foodie" to the French.