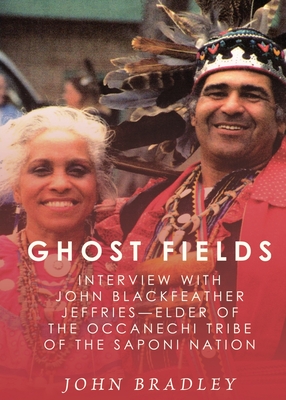 Ghost Fields is a short study of the life and love of a most remarkable man of Indian heritage growing up in the historic NC town of Hillsborough in the late 20th century. Ghost Fields is a coming-of-age story of John Blackfeather Jeffries, a member of the Occaneechi Tribe, a people in relative obscurity in the counties bordering the Virginia-North Carolina border, a people rising from resting in hibernation for centuries.

1st it applies to the actual fields by the Eno River where archeologists uncovered evidence of numerous ancient villages, and where Blackfeather served as an intermediary between the archeologists and student diggers and a large albino red-tailed hawk that guarded the buried bones of the Occaneechi village of the early 1770s.

2nd, Ghost Field captures the amorphous multi-racial heritage of the Occaneechi, being Indian, white and black, and dating back to the time of the Revolution.

3rd, "Ghost" applies to one mysterious white man in Blackfeather's maternal linage. It turns out that he was a prominent physician in Hillsborough and a plantation owner at the time of the Civil War.