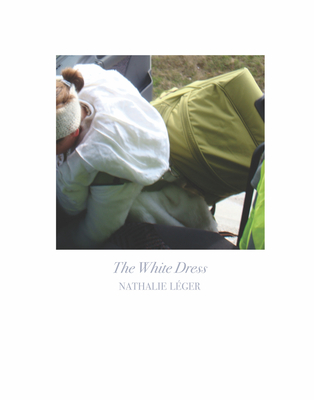 The third in Léger's triptych of books on women artists, The White Dress is an intense study of the Italian performance artist Pippa Bacca and her phantom in Léger's psyche. In 2008 Bacca was murdered on her international hitchhiking; she'd set out in a wedding dress and would wear it the whole time as she traveled in a declaration of her belief in world peace. Bacca's death and her work as an artist transfix Léger as she muddles through her own uncertainties in her relationship with her mother, scorned by her divorce with Léger's father and obsessed with retribution. The line between performance and reality blurs in this genre-bending work which will interest readers of Moyra Davey and Aisha Sabatini Sloan, and fans of Ana Mendieta and Marina Abramović.

The third in Nathalie Léger’s acclaimed genre-defying triptych of books about the struggles and obsessions of women artists.

The White Dress is the third in Nathalie Léger's award-winning triptych of books about women who “through their oeuvre, transform their lives into a mystery” (ELLE). In Exposition, Léger wrote about the Countess of Castiglione, the most photographed woman of the nineteenth century; in Suite for Barbara Loden she took up the actress and filmmaker Barbara Loden; here, Léger grapples with the tragic 2008 death of Italian performance artist Pippa Bacca, who was raped and murdered while hiking from Italy to the Middle East in a wedding dress to promote world peace. A harrowing meditation on the risks women encounter, in life and in art, The White Dress also brings to a haunting conclusion Léger's personal interrogation—sustained across all three books—of her relationship with her mother and the desire for justice in our lives.

Nathalie Léger is the award-winning author of Suite for Barbara Loden and Exposition, as well as an editor and archivist. She has curated exhibitions on Roland Barthes and Samuel Beckett for the Centre Pompidou, and is Director of the Institut Mémoires de l’Édition Contemporaine, an organization dedicated to preserving the archives of modern French writers.

Natasha Lehrer is an award-winning writer and literary translator. She has written features and book reviews for a variety of newspapers, including The Guardian, The Times Literary Supplement, and The Observer.

“With mirrors and lenses, with echoes and silences, Léger’s books suggest that we may write and perform the stories of our lives, but our roles have also been written for us, and have already been performed by other women, whose experiences we may recognize as our own. In the end, the most original performance here is Léger’s, and it is undeniably virtuosic.” —Eula Biss, The New Yorker

“In Léger’s hands, desolation can reveal a woman in all her multiplicity—in her ugliness and abasement and determined self-destruction, seemingly ground down to the nubs of her sorrow, but ultimately emerging with a strange richness, full of haunted persistence, droll knowingness, untamed desires, and hardscrabble resilience.” —Leslie Jamison, Bookforum

“Léger’s vigorous work consistently satisfies, with ideas crystallizing with the clarity of a photograph.” —Publishers Weekly

“I’ve just re-read Suite for Barbara Loden by Nathalie Léger, translated by Cécile Menon and Natasha Lehrer, as well as the two forthcoming books that form a trilogy with that one: The White Dress, also translated by Lehrer, and Exposition, translated by Amanda Demarco. All three defy categorisation—history, essay, memoir, fiction. I admire the wholeness and agility of these works very much.” —Catherine Lacey

“This trilogy feels more than a feminist recovery of narrative: it is a method through which the lives of women artists are reimagined and remade through the writer herself, a mode of hospitality in which lives coalesce and transform one another.” —Katie Da Cunha Lewin, The White Review

“With ferocity and pathos, Léger enters into a standing-with relationship with these other women only to realize she’s been in touch with herself the entire time. This feels to me like the natural movement of the most revelatory art criticism—to move close to the work, to ride along then pierce the work’s textured surface into its mysterious netherworld then looping back out (through innards) towards these words you hear out there in the private distance only to find them coming from your own mouth. With all of these women—Countess of Castiglione, Barbara Loden and Wanda (and Alma H. Malone), and Pippa Bacca—Léger comes to know them as women who lived rich lives, artists’ lives, intensely felt.” —Jay Ponteri, Essay Daily

“The suffocating interpolations of being a woman have concealed the words of so many: Pippa Bacca, whose seemingly naive project is now bound to her rape and murder; American actor and director Barbara Loden, whose project of semi-autobiographical film Wanda details the listlessness of life for the 1970s American housewife; The Countess of Castiglione, whose hope had been to exhibit her photos at the upcoming 1900 International Exposition; and Léger’s own mother, whose words ‘too have been hidden away.’ The triptych not only unearths the lost narratives of noted women; but more significantly the writers’ reckoning with her own mother—‘I never helped her, I never stood up for her’—suggests that the triptych’s aim is to give voice to one woman: her mother.” —Clancey D’Isa, Chicago Review of Books

“Now that all three books exist in English thanks to Dorothy Project and exceptional translations by Natasha Lehrer and Amanda DeMarco, it feels as if the stakes have been tripled. Though each book is a case study of a particular woman’s life, the neat boundaries of these subjects aren’t meant to hold. ‘On the winding path of femininity,’ Léger writes, ‘the loose stone you stumble over is another woman.’ These slippages are part of the danger and excitement of Léger’s work—look long enough at another woman, and you may find yourself looking in a mirror.” —Laura Marris, On the Seawall