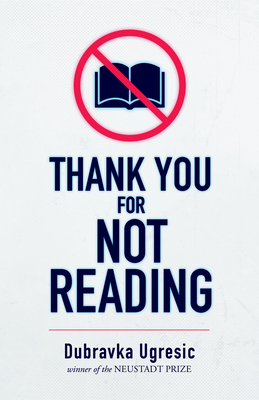 Thank You for Not Reading is a biting critique of book publishing: agents, subagents, and scouts, supermarket-like bookstores, Joan Collins, book fairs that have little to do with books, authors promoted because of sex appeal instead of merit, and editors trying to look like writers by having their photograph taken against a background of bookshelves. Nowadays, the best strategy for young authors wanted to publish is to become famous in some other capacity first--as a sports star, an actress, or an Ivana Trump. One of the most interesting and paradoxical comparisons coming out of Ugresic's dissection of book culture is the similarity between the art of socialist realism (as prescribed by the Soviets) and the nature of the contemporary marketplace to produce and promote art that appeals to everyone. Thanks to cultural forces like listicles and celebrity book clubs, the publishing machine neglects literature in favor of accessible, entertaining books for the masses.

Dubravka Ugresic is the author of six works of fiction, including The Museum of Unconditional Surrender, and six essay collections, including the NBCC award finalist, Karaoke Culture. She went into exile from Croatia after being labeled a witch for her anti-nationalistic stance during the Yugoslav war. She now resides in the Netherlands. In 2016, she was awarded the Neustadt International Prize for Literature for her body of work. Celia Hawkesworth has translated The Museum of Unconditional Surrender by Dubravka Ugresic, Omer-Pasha Latas by Nobel Prize winner Ivo Andric, and several works by Dasa Drndic, including EEG, which won the 2020 Best Translated Book Award. Damion Searls is a translator from German, French, Norwegian, and Dutch and a writer in English. He was longlisted for the 2020 International Booker Prize with Jon Fosse, for The Other Name: Septology I-II; he has received Guggenheim, Cullman Center, and two NEA fellowships, and the Schlegel-Tieck Translation Prize for Hans Keilson's Comedy in a Minor Key, the PEN Center USA Translation Award for Jon Fosse's Aliss at the Fire, and the Helen and Kurt Wolff Translator's Prize for Uwe Johnson's four-volume Anniversaries, among other awards. He has also edited a one-volume abridgment of Henry David Thoreau's Journal; his own books include What We Were Doing and Where We Were Going (stories), The Inkblots (a history of the Rorschach Test and biography of its creator, Hermann Rorschach, which has been translated into ten languages), and The Philosophy of Translation.