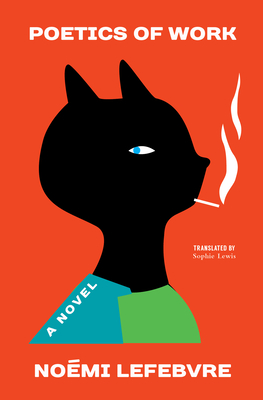 Keeping with the theme of my final staff pick of 2022, my first pick of 2023 is also about neoliberalism, capitialism, and, you guessed it, Work. A slim novel with Personality as well as Looks (you see that provocative red, standing over there at the wall? beckoning you with that come hither expression?), this was one of my favorite reads of last year.  Lefebvre tells the story of a young poet, over-educated, perceptive, and not interested in working. In fact all the narrator wants is to write poetry and drink wine by the moonlight. In other words, wants to build a life of leisure and art. Who cannot relate? The novella is hilarious, astute, and a reminder that work is not liberation and in might not even be the greatest meaning in life.

A state of emergency has been declared in France. In Lyon, protesters and police clash in the streets. At the unemployment office, there are few job opportunities for poets going around. So the poet reads accounts of life under the Third Reich and in Nazi language, smokes cannabis, walks through the streets, and eats bananas, drawn by an overbearing father into a hilarious and often cynical exploration of the push to be employed and the pull to write. In this Oulipian experiment written without gender markers for its narrator, Noémi Lefebvre presents us with a comic and irreverent reckoning with the rise of nationalism and the hegemony capitalism has on our language, actions, and identities.