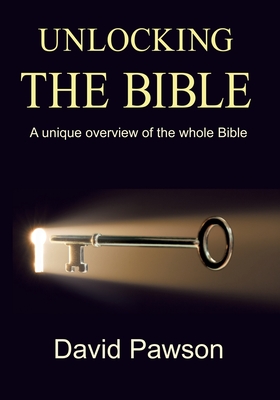 A unique overview of both the Old and New Testaments, from internationally acclaimed evangelical speaker and author, David Pawson. Unlocking the Bible opens up the word of God in a fresh and powerful way. Avoiding the small detail of verse by verse studies, it sets out the epic story of God and his people in Israel. The culture, historical background and people are introduced and the teaching applied to the modern world. Eight volumes have been brought into one compact and easy to use guide to cover both the Old and New Testaments in one massive omnibus edition. The Old Testament: The Maker's Instructions -- The five books of law A Land and A Kingdom -- Joshua, Judges, Ruth, 1&2 Samuel, 1&2 Kings Poems of Worship and Wisdom -- Psalms, Song of Solomon, proverbs, Ecclesiastes, Job Decline and Fall of an Empire -- Isaiah, Jeremiah and other prophets The Struggle to Survive -- Chronicles and prophets of exile The New Testament: The Hinge of History -- Mathew, Mark, Luke, John and acts The Thirteenth Apostle -- Paul and his letters Through Suffering to Glory -- Revelation, Hebrews, the letters of James, Peter and Jude Already an international best-seller, this new North American edition includes nearly 100 revisions and updates from the best-selling original; the first and only updated English language version in the world. This new North American edition has been completely reformatted and resized, so it's easier to read and easier to handle, but nothing left out; a massive 826 pages.

David Pawson occupies a key position among British Christian writers. His best known work, Unlocking the Bible, continues to be a worldwide bestseller in print, audio and video formats. Unlocking the Bible and other works such as The Normal Christian Birth have been called Pawson's legacy to the church. Pawson is known for accepting biblical text as the authoritative word of God while explaining its meaning and context in a practical and understandable language. Because he follows the teaching of Scripture where it clashes with church tradition, his books are often controversial. Today David speaks around the world and is received on God TV by millions of viewers in almost every country. Born in 1930, David, determined to become a farmer, began his career with a B.Sc. in agriculture at Durham University in England. He was surprised when God intervened and led him to become a Christian minister. Studying for an advanced degree in theology at Cambridge University, under the influence of liberal educators, Pawson lost his trust in the Bible and very nearly his faith in God. After a short spell in ministry for the Methodist church, he regained his trust in the infallibility and inerrancy of the Bible while a chaplain in the Royal Air Force of Great Britain. During this period he decided to preach the Bible systematically from start to finish. The results among the servicemen surprised both him and them, and confirmed to him Scripture s inspiration. Since then, his preaching has either been Bible study or topical studies based on a detailed, contextual examination of what the Bible says. As pastor of Guildford Baptist Church (the Millmead Centre), Pawson established a reputation among both evangelicals and charismatics as an effective and balanced expositor of the Bible. Under Pawson s ministry, Millmead became the largest Baptist church in Britain. In the last forty years literally millions of David's messages on cassette tape (CD, DVD and MP3 today) have been distributed around the world. He is a frequent speaker in the UK and throughout Europe; his speaking engagements have taken him to many parts of the world, including Australia, New Zealand, South Africa, The Netherlands, Israel, Southeast Asia and the United States. David Pawson lives near Basingstoke, Hampshire in southern England with his wife Enid.