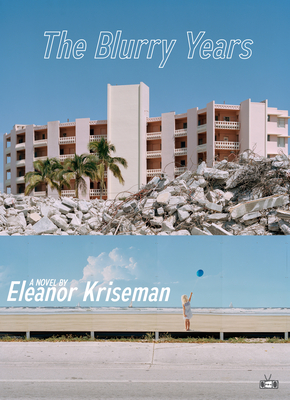 By Eleanor Kriseman
$15.99
Available at our distributor; usually ships in 1-5 days

"Kriseman's is a new voice to celebrate." --Publishers Weekly

The Blurry Years is a powerful and unorthodox coming-of-age story from an assured new literary voice, featuring a stirringly twisted mother-daughter relationship, set against the sleazy, vividly-drawn backdrop of late-seventies and early-eighties Florida.

Callie--who ages from six to eighteen over the course of the book--leads a scattered childhood, moving from cars to strangers' houses to the sand-dusted apartments of the tourist towns that litter the Florida coastline.

Callie's is a story about what it's like to grow up too fast and absorb too much, to watch adults behaving badly; what it's like to be simultaneously in thrall to and terrified of the mother who is the only family you've ever known, who moves you from town to town to leave her own mistakes behind.

With precision and poetry, Kriseman's moving tale of a young girl struggling to find her way in the world is potent, and, ultimately, triumphant.

Eleanor Kriseman, author of the novel The Blurry Years, is a social worker in New York City. She was born and raised in Florida.