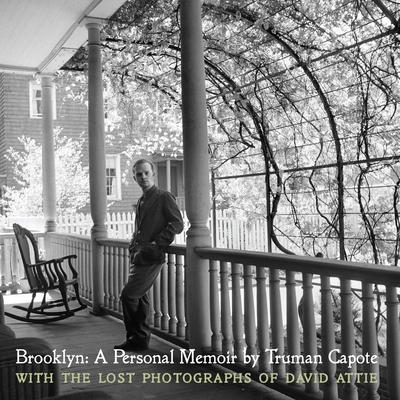 In 2001, Truman Capote’s stylish homage to Brooklyn was brought back into print, but not until 2014— more than fifty years after they were taken—were the original photographs commissioned to illustrate the essay discovered by the late photographer’s son. Also found among the negatives were previously unknown portraits of Capote; none of the photos had ever been published.

Now, with the publication of Brooklyn: A Personal Memoir, with the lost photographs of David Attie, the words and images are united for the first time.

With an introduction by George Plimpton and afterword by Eli Attie.

Truman Capote (1924–1984), the novelist, journalist, and celebrated man-about-town, is best known as the author of Other Voices, Other Rooms; The Grass Harp; Breakfast at Tiffany’s; and In Cold Blood.

David Attie (1920–1982), a commercial and fine art photographer, began his photographic career as a student of influential Harper’s Bazaar art director Alexey Brodovitch, who gave Attie his first professional assignment: to create a series of photo montages to illustrate Capote’s Breakfast at Tiffany’s. Attie’s work appeared in Vogue, Time, Newsweek, and Harper’s Bazaar, among other publications. He produced two books of photographs, Russian Self-Portraits, and (together with Chuck Close, Robert Mapplethorpe, and others), Portrait: Theory.

George Plimpton (1927–2003), the originator of “participatory journalism,” was the editor of The Paris Review. His books include Paper Lion, Out of My League, The Bogey Man, Open Net, The Curious Case of Sidd Finch, and The X Factor.

Eli Attie is a television writer and producer. He served as a special assistant to President Bill Clinton, and then as  Vice President Al Gore’s chief speechwriter. Attie was a longtime writer on the series The West Wing and House. He grew up in New York City, is a graduate of Hunter College, and lives in Los Angeles.

"This marriage of Capote's glimmering words with Attie's harmonizing photographs is perfected by the younger Attie's narrative, in this unparalleled addition to the Capote canon.” —Shelf Awareness

"When it comes to illustrated works, one relatively slim volume stands out. Bridging the gap between essay collections and glossy coffee table tomes is Brooklyn: A Personal Memoir...A real gem of a find.” —One of the 8 best books in art, Christmas 2015, The Independent (UK)

"Now, no matter where you live, you can get back to Capote's Brooklyn with its eccentric rich old ladies, multi-ethnic sailors, also home to drunks, dead horses in the street, ‘brats' that rollerskated and juvenile delinquent gangs because of a marvelous stash of photos of Capote and his Brooklyn world discovered by the son of the photographer David Attie which has been published along with the original essay he was commissioned to write about his 'hood for Holiday Magazine in 1959, in Brooklyn: A Personal Memoir by Truman Capote.” —Patricia Zohn, The Huffington Post
"Capote’s meandering thinking and gorgeous prose preserve the waterfront architecture and eccentric locals he had come to love while his contemporaries praised Manhattan. The photos amp up the nostalgic beauty...The Brooklyn celebrated here is definitively, as the title promises, Capote’s personal Brooklyn, and it might seem a far cry from other documentations of the borough in the 1950s. For fans of the writer or devotees of New York history, the celebration of this place, where, 'in the greenless grime-gray, oases do occur, splendid contradictions,' will be a valuable memento.” —Publishers Weekly

"The long-lost photos...bring even more life to Capote’s sparkling description of the history and spirit of the neighborhood, with its eccentric characters, back alleys and fine houses ('as elegant and other-era as formal calling cards').”
—The New York Times, “Travel"