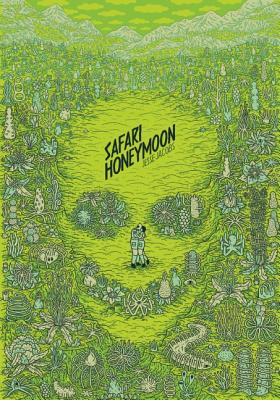 By Jesse Jacobs
Email orders@greenlightbookstore.com for information about this item.
Out of Print / Unavailable

Jesse Jacobs has long been a leader in the Canadian underground comics scene, and it’s easy to understand why with one peek at Safari Honeymoon. A poetic and humorous voice within a community that's known to break with the conventions of visual storytelling, I findJacobs' work to be well worth pouring over multiple times. His attention to detail with both dialogue and illustrative form makes for a body work that’s a pleasure to recommend!

Picked by Joey in Fort Greene

Join a pair of young newlyweds as they descend deep into a mysterious forest, encountering unknown creatures and unimaginable landscapes. Amongst the unusual flora and fauna, they discover within themselves something more strange and terrible than any sight their safari has to offer. Safari Honeymoon is a tale of jungle love and jungle madness.

Jesse Jacobs was born in Moncton, New Brunswick, and now draws comics and things from his home in London, Ontario. He has worked on the Cartoon Network show Adventure Time and has appeared in the 2012 and 2013 editions of Best American Comics.

Jesse Jacobs was born in Moncton, New Brunswick, and now draws comics and things from his home in London, Ontario. In 2009, his books Small Victories and Blue Winter were short listed at the Doug Wright Awards for Canadian Cartooning. He received the Gene Day Award for best Canadian Comic Book Self-Publisher of 2008. Even the Giants (AdHouse, 2011) marked his major publishing debut after several award-winning, self-published titles. He has worked on the Cartoon Network show Adventure Time, and his work has appeared in the acclaimed Latvian comics anthology s!, as well as the 2012 and 2013 editions of Best American Comics published by Houghton Mifflin Harcourt.