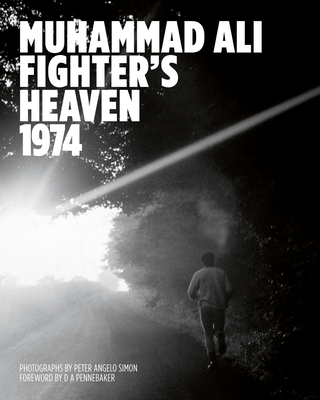 In this previously unpublished photo-essay, the legendary boxer Muhammed Ali is captured up close and unguarded in the run-up to the Rumble in the Jungle

In October 1974, Muhammad Ali attempted to regain the world heavyweight boxing championship title that was stripped from him when he refused the Vietnam draft seven years earlier. He faced the brutal, undefeated George Foreman in Zaire, Africa, the fight he had dubbed "The Rumble in The Jungle." Only weeks before, on August 11-12, photographer Peter Angelo Simon was invited to experience the private world of one of the most famous people on the planet as he prepared mentally and physically for the biggest challenge of his life.

This two-day photo-essay includes many previously unpublished photographs and captures Ali the man, unguarded, away from the glare of the media spotlight at his Pennsylvania sanctuary. It includes a foreword by D.A. Pennebaker, the foremost chronicler of American counterculture in the 1960s, and an introduction by Peter Angelo Simon, who writes: "I shot 33 rolls in the two days. Ali said nobody had ever taken so many pictures of him. I believe these photographs reveal aspects of Ali's fascinating character not previously seen." Few photographers got as close to the boxer behind the legend. This extraordinary book reveals the preparation for a seminal moment in cultural and political history.

Peter Angelo Simon has explored many forms of photographic expression in his wide-ranging career. His work has been featured in books, advertising campaigns, corporate communication, and magazines worldwide, including the New York Times Magazine. His photographs have been exhibited in museums and galleries internationally, including the Smithsonian.D. A. Pennebaker is an American documentary filmmaker and foremost chronicler of American counterculture in the sixties.