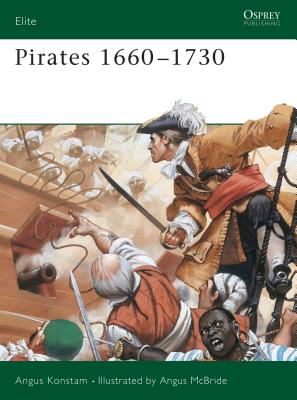 By Angus Konstam, Angus McBride (Illustrator)
$20.00
Email orders@greenlightbookstore.com for information about this item.

This book gives an accurate picture of the pirates who sailed in the waters of the Caribbean and off the American coastline during the 'golden age' of piracy between 1660 and 1730. It traces the origins of piratical activity in the 16th century and examines the Boucaneer (Buccaneer) culture in Jamaica and Hispaniola. It details what drove individuals to a life of piracy, how they dressed, their weaponry, the ships they used and the codes by which they operated. Whether viewed as villains or victims the Pirates were a major threat to shipping and commerce in the western Atlantic for more than 70 years.

Angus Konstam hails from Orkney, off the north of Scotland, and is the author of well over 100 history books, 75 of which are published by Osprey. He has written widely on naval history from The Pirate World to his most recent works, Hunt the Bismarck and Mutiny on the Spanish Main, both published by Osprey. A former naval officer, he has worked as a museum curator in the Royal Armouries, Tower of London and the Mel Fisher Maritime Museum in Key West, Florida. He is a Fellow of the Royal Historical Society and a former Chair of the Society of Authors in Scotland. Now a full-time author and historian, he has returned to live in Orkney.