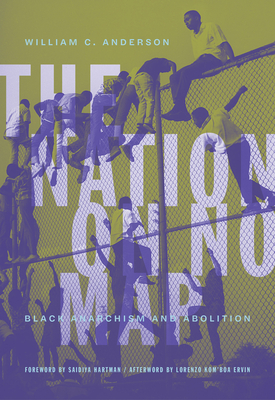 A call for Black survival in the face of widespread crisis.

The Nation on No Map examines state power, abolition, and ideological tensions within the struggle for Black liberation while centering the politics of Black autonomy and self-determination. Amid renewed interest in Black anarchism among the left, Anderson offers a principled rejection of reformism, nation building, and citizenship in the ongoing fight against capitalism and white supremacism. As a viable alternative amidst worsening social conditions, he calls for the urgent prioritization of community-based growth, arguing that in order to overcome oppression, people must build capacity beyond the state. It interrogates how history and myth and leadership are used to rehabilitate governance instead of achieving a revolutionary abolition. By complicating our understanding of the predicaments we face, The Nation on No Map hopes to encourage readers to utilize a Black anarchic lens in favor of total transformation, no matter what it's called. Anderson's text examines reformism, orthodoxy, and the idea of the nation-state itself as problems that must be transcended and key sites for a liberatory re-envisioning of struggle.