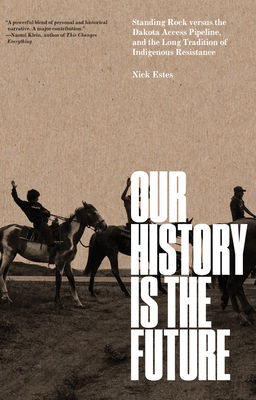 In 2016, a small protest encampment at the Standing Rock Reservation in North Dakota, initially established to block construction of the Dakota Access oil pipeline, grew to be the largest Indigenous protest movement in the twenty-first century. Water Protectors knew this battle for native sovereignty had already been fought many times before, and that, even after the encampment was gone, their anticolonial struggle would continue. In Our History Is the Future, Nick Estes traces traditions of Indigenous resistance that led to the #NoDAPL movement. Our History Is the Future is at once a work of history, a manifesto, and an intergenerational story of resistance.

Nick Estes is a citizen of the Lower Brule Sioux Tribe and an Assistant Professor of American Studies at the University of New Mexico.

“Embedded in the centuries-long struggle for Indigenous liberation resides our best hope for a safe and just future for everyone on this planet. Few events embody that truth as clearly as the resistance at Standing Rock, and the many deep currents that converged there. In this powerful blend of personal and historical narrative, Nick Estes skillfully weaves together transformative stories of resistance from these front lines, never losing sight of their enormous stakes. A major contribution.”
—Naomi Klein, author of This Changes Everything

“Reading Our History Is the Future is like standing in the middle of camp again. During the Standing Rock uprising, we witnessed what our ancestors always prayed for—making their dreams a reality.”
—Bobbi Jean Three Legs, leader of the Standing Rock Youth Runners

“In Our History Is the Future historian Nick Estes tells a spellbinding story of the 10 month Indigenous resistance at Standing Rock in 2016, animating the lives and characters of the leaders and organizers, emphasizing the powerful leadership of the women. Alone this would be a brilliant analysis of one of the most significant social movements of this century. But embedded in the story and inseparable from it is the centuries long history of the Oceti Sakowin’ resistance to United States’ genocidal wars and colonial institutions. And woven into these entwined stories of Indigenous resistance is the true history of the United States as a colonialist state and a global history of European colonialism. This book is a jewel—history and analysis that reads like the best poetry—certain to be a classic work as well as a study guide for continued and accelerated resistance.”
—Roxanne Dunbar Ortiz, author of An Indigenous Peoples’ History of the United States

“When state violence against peaceful protest at Standing Rock became part of the national consciousness, many noticed Native people for the first time—again. Our History Is the Future is necessary reading, documenting how Native resistance is met with settler erasure: an outcome shaped by land, resources, and the juggernaut of capitalism. Estes has written a powerful history of Seven Fires resolve that demonstrates how Standing Rock is the outcome of history and the beginning of the future.”
—Louise Erdrich, author of the National Book Award winner The Round House

“A touching and necessary manifesto and history featuring firsthand accounts of the recent Indigenous uprising against powerful oil companies … With an urgent voice, Estes reminds us that the greed of private corporations must never be allowed to endanger the health of the majority. An important read about Indigenous protesters fighting to protect their ancestral land and uphold their historic values of clean land and water for all humans.”
—Kirkus

“Our History Is the Future offers a first draft of history that will serve as the last word for years to come. Combining the literary skill of the poet, the rich contextual knowledge of the historian, and the sharp edge of experience, Nick Estes has crafted a powerful account of the Standing Rock resistance, situating it in a struggle lodged deep in time and across the full reach of global solidarities.”
—Philip J. Deloria, author of Playing Indian

“Our History Is the Future brings the history of Native American anti-imperialism to the center of the study of racial capitalism while renewing the focus on political economy in Indigenous Studies; it brings the experience of the camp at Standing Rock to the study of history, and deep learning to the ongoing fight for sovereignty; it is a book by a young scholar that draws brilliantly on the wisdom of centuries of struggle. In short: you should read it.”
—Walter Johnson, author of River of Dark Dreams: Slavery and Empire in the Cotton Kingdom

“Our History Is the Future is a game-changer. In addition to providing a thorough and cogent history of the long tradition of Indigenous resistance, it is also a personal memoir and homage to the Oceti Sakowin; an entreaty to all their relations that demands the ‘emancipation of the earth.’ Estes continues in the legacy of his ancestors, from Black Elk to Vine Deloria, he turns Indigenous history right-side up as a story of self-defense against settler invasion. In so doing, he is careful and judicious in his telling, working seamlessly across eras, movements, and scholarly literatures, to forge a collective vision for liberation that takes prophecy and revolutionary theory seriously. The book will be an instant classic and go-to text for students and educators working to understand the ‘structure’ undergirding the ‘event’ of the Dakota Access Pipeline. This is what history as Ghost Dance looks like.”
—Sandy Grande, author of Red Pedagogy: Native American Social and Political Thought

“This extraordinary history of resistance counters the myth of Indigenous disappearance and insignificance while calling into question the very notion that resistance itself is impossible in a world saturated by capital and atrophying inequality. This is a radical Indigenous history in its finest form—that connects individual lives to global scales of political articulation while remaining attentive to intellectual formation and coalitional politics from the nineteenth century to the present. Estes draws from multiple archives and intellectual traditions and seeks to not only connect past to present but also to transform futures and possibilities for justice.”
—Audra Simpson, Mohawk Interrupts: Political Life Across the Borders of the Settler States

“Nick Estes is a forceful writer whose work reflects the defiant spirit of the #NoDAPL movement. Our History Is the Future braids together strands of history, theory, manifesto and memoir into a unique and compelling whole that will provoke activists, scholars and readers alike to think deeper, consider broader possibilities and mobilize for action on stolen land.”
—Julian Brave Noisecat, 350.org

“Fearless and inspiring, Nick Estes delivers a powerful rebuke of Euro-American Manifest Destiny with an Indigenous perspective that is inclusive and ideological precise. This book correctly, if not necessarily, focuses its energy on the natural evolutionary and revolutionary pathway of Oceti Sakowin resistance. Respectful, brilliant, and insightful, This book should be considered a key ingredient to achieve the universal Native construct of balance—something we must all have to ensure our continued existence.”
—Marcella Gilbert, Lakota Water Protector, Warrior Women Film Project

“Our History Is the Future establishes Nick Estes as one of the leading scholars of our time. This dynamic book offers a careful, deeply researched, and even-handed account of the events at Standing Rock, placing them in a long continuum of Oceti Sakowin resistance. This is a war story that links the #NoDAPL movement in the present to anti-colonial and anti-capitalist struggles in the past to demonstrate the possibilities of liberated futures.”
—Jordan T. Camp, author of Incarcerating the Crisis: Freedom Struggles and the Rise of the Neoliberal State

“It is customary to hail a bold young author as the voice of their generation. In Our History Is the Future, Nick Estes gives voice to many generations, those who’ve come before and those still to come. The book slips through time, evoking the scent of campfire that once indicted Indigenous people in the 19th century, a smoke that still lingers on twenty-first century Water Protectors and marks them as enemies of the state. This utterly astonishing book imparts the long history of Indigenous people, their relatives, and their struggle for liberation against capitalist North America’s settler colonial violence. The long memory of the people, Estes shows, cannot be clipped by the oblivion of empire. The people do not forget.”
—Christina Heatherton, co-editor of Policing the Planet: How the Policing Crisis Led to Black Lives Matter

“A mindful and dynamic text. Nick Estes' narrative power gives dynamism and detailed realism to some of the most formative movements of our time. The book is expansive in its isolation and focus. The book embodies resistance and shows the true effort it takes to maintain it.”
—Terese Mailhot, author of Heartberries

“With scrupulous research and urgent prose, [Nick Estes] declares the DAPL protest a flowering of indigenous resistance with roots deep in history and Native sacred land … A powerful work, Estes’s condemnation of the United States government is clear and resonant.”
—Publishers Weekly

“This book is a mustread for anyone interested in the #NoDAPL movement. It works as an introduction—and a fearless analysis of—one of the biggest social movements of our times.”
—Fiorella Lecoutteux, Peace News

“Activist, scholar, and Lower Brule Sioux citizen Estes challenges the power systems that have attacked and disenfranchised Indigenous peoples for centuries with both the story of northern Plains peoples as well as a political philosophy of Indigenous empowerment. The author provides context for contemporary struggles against the Keystone XL and the Dakota Access pipelines.”
—Library Journal

“Our History Is The Future traces not just an Indigenous politics of opposition, but a vibrant and omnipresent theory of decolonisation that strives to create and preserve as well as resist … Perhaps the most powerful argument of the book is the conceptualisation of Indigenous resistance as an omnipresent process that runs throughout the course of American history.”
—Shelley Angelie Saggar, Hong Kong Review of Books

“Our History Is the Future should be on the reading lists of historians, social scientists, and members of the public interested in grasping the interconnections and continuity among the many efforts of Indigenous resistance to settler colonialism and corporate encroachments onto their lands, waters, and natural resources.”
—Simone Poliandri, American Indian Culture and Research Journal