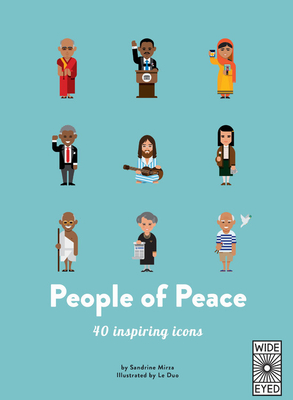 Dreamers, leaders, fighters for our rights...meet 40 amazing activists for peace! Learn how Martin Luther King, Gandhi, Eleanor Roosevelt, Nelson Mandela, and many others dedicated their lives to making the world a better place in this fact-packed book from the 40 Inspiring Icons series.

Meet Albert Einstein, a Nobel Prize–winning physicist who used his fame to speak out against nuclear weapons; Pakistani activist Malala Yousafzai, who stood up for the right to education and survived a gunshot wound to her head; and Pablo Picasso, who created extraordinary paintings to promote peace and raise awareness of the atrocities of war. These 40 incredible people each changed the world in their own unique, and peaceful, way:

Each spread presents a single peacemaker, highlighting key facts about their identity, actions, and works, along with a fun, illustrated depiction of them that calls out elements of their life and style.

With so many icons to admire, who will you choose as your hero?

Each book in the 40 Inspiring Icons series introduces readers to a fascinating non-fiction subject through its 40 most famous people or groups. Explore these other great topics through their most interesting icons: Black Music Greats, Super Scientists, Soccer Stars, Fantastic Footballers, Music Legends, and Greek Gods and Heroes.

Sandrine Mirza holds a Master's degree in History from the University of Paris and is a graduate of the Institut Français de Presse. After six years of working at a publisher, she is now a full-time author, specializing in history. Sandrine lives in Paris.

Le Duo is an illustration partnership between Alberic and Leopoldine, who trained at the Esag-Penninghen (Paris) and the Chelsesa College of Art and Design (London). They specialise in advertising (clients include Monoprix, Thalys, and Nestlé) and editorial illustrations, having being featured in The Good Life, Men's Health, and Le Monde. Le Duo are based in Paris.