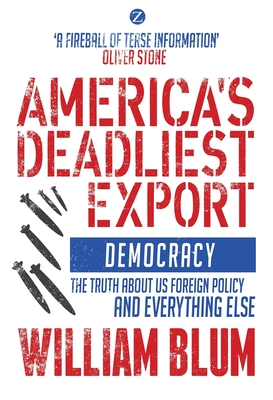 Since World War II, the United States has repeatedly posited itself as a defender of democracy, using its military might to promote freedom abroad even as it ascended to the status of the world’s only superpower. The answer to almost every international problem, it seems, has been American military intervention—which is always pitched as a disinterested, noble attempt to deal with a crisis.

“A fireball of terse information—one of our best muckrakers.”—Oliver Stone

“This book deals with unpleasant subjects yet it is a pleasure to read. Blum continues to provide us with convincing critiques of US global policy in a freshly informed and engaging way.”—Michael Parenti, author of The Face of Imperialism

“With good cheer and humor Blum guides us toward understanding that our government does not mean well. Once we've grasped that, we're far more capable of effectively doing good ourselves.”—David Swanson, author of War Is a Lie

After leaving the State Department in 1967, William Blum founded the Washington Free Press and has since worked as a freelance journalist around the world.

“If you only read one book about global politics this year make it this one.”
— Counterfire

"Blum's forthright book successfully portrays a non-mainstream image of the US after the Second World War. His blunt analysis of raw data gives us a somewhat inconvenient perspective of Western international affairs. . . . A valuable resource."
— Teodora-Maria Daghie

“As in the past, in this remarkable collection Blum concentrates on matters of great current significance and does not pull his punches. They land, backed with evidence and acute analysis. It is a perspective on the world that Westerners should ponder, and take as a guideline for action.”
— Noam Chomsky