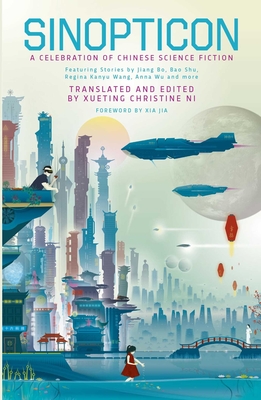 A stunning collection of the best in Chinese Science Fiction, from Award-Winning legends to up-and-coming talent, all translated here into English for the first time.

This celebration of Chinese Science Fiction — thirteen stories, all translated for the first time into English — represents a unique exploration of the nation’s speculative fiction from the late 20th century onwards, curated and translated by critically acclaimed writer and essayist Xueting Christine Ni.

From the renowned Jiang Bo’s ‘Starship: Library' to Regina Kanyu Wang’s ‘The Tide of Moon City', and Anna Wu’s ‘Meisje met de Parel', this is a collection for all fans of great fiction.

Xueting Christine Ni was born in Guangzhou, during China's "re-opening to the West". Having lived in cities across China, she emigrated with her family to Britain at the age of 11, where she continued to be immersed in Chinese culture, alongside her British education, realising ultimately that this gave her a unique a cultural perspective, bridging her Eastern and Western experiences. After graduating in English Literature from the University of London, she began a career in the publishing industry, whilst also translating original works of Chinese fiction. She returned to China in 2008 to continue her research at Central University of Nationalities, Beijing. Since 2010, Xueting has written extensively on Chinese culture and China's place in Western pop media, presenting publicly in collaboration with companies, theatres, institutions and festivals. Having worked on manhua, poetry, documentaries and science fiction, she continues her literary translation of China to the West, with a mission to help improve understanding of Chinese heritage, culture and innovation, and introduce its wonders to new audiences. Xueting currently lives in the suburbs of London with her partner and their cat, both of whom are learning Chinese. You can find out more about her work from her website: snowpavilion.co.uk.

A graduate of Shanghai Jiaotong University of Communications, Nian Yu is a contracted Storycom writer, and a self-proclaimed post-95 avant-garde sci fi author. Ever since her debut Wild Fire, she has been exploring the fantasy imagination, not only creating scifi, but fantasy and fairy tales, publishing many pieces in Science Fiction World and Sci-Fi Gin—Youth Edition. She won the New Author Silver Award at the 7th Xingyun and has published a short fiction collection, Lilian is Everywhere.

Zhao Haihong holds an MA in English and American literature from Zhejiang University and a Ph.D in art history from the China Academy of Arts. She teaches at Zhejiang Gongshang University in Hangzhou. She has been publishing SF stories since 1996 and is the winner of the National Award For Outstanding Children’s Literature and a six-time winner of the GalaxyAward. Her translated stories “Exuviation” and “Windhorse” have appeared in Lady Churchill’s Rosebud Wristlet; and “The Starry Sky over the Southern Isle” has been published on Asimov’s Science Fiction. Her story “1923, A Fantasy” (translated by Nicky Harman and Pang Zhaoxia) was included in the The Reincarnated Giants: An Anthology of 21st-Century Chinese Science Fiction by Linda Rui Feng. She is currently working with publishers around the world on stories for several upcoming anthologies.

Regina Kanyu Wang is a bilingual writer from Shanghai who has won multiple Xingyun Awards, the SF Comet International SF Writing Competition, and the Annual Best Works of Shanghai Writers’ Association Awards. Her stories can be found in Shanghai Literature, Galaxy’s Edge, Clarkesworld and more. Her essays can be found in publications such as Mithila Review, Broken Stars, and Korean Literature Now. She has published two science fiction story collections, Of Cloud and Mist 2.2 and The Seafood Restaurant in Chinese and her works have been translated into multiple languages and published around the world. She is also a PhD fellow of the CoFUTURES project at the University of Oslo, researching Chinese science fiction from gender and environmental perspectives.

Wang Jikang, born in 1948, is a renowned science fiction writer, senior engineer. Winner of multiple Yinhe Awards, he is the only writer to have won the Lifetime Achievement Award simultaneously at the Yinhe as well as the Xingyun. Launching his writing career in the early 1990s, he has composed over a hundred works of science fiction, being named one the Three Leading Lights of Chinese Sci-Fi. His signature works include The Return of Adam, “Sowing on Venus” and The Song of Life.

Tang Fei, writer, commentator. Member of the Shanghai Writer’s Association and the SFWA. Her signature works include Paradise in the Clouds, The Person who Saw Cetus and The Anonymous Banquet. Since 2013, ten of her stories have been translated and published around the world; her novella The Panda Keeper won Best Microfiction at 2019’s Smokelong Quarterly, Wu Ding’s Journey to the West won the Silver Prize for Most Popular Deduction Fiction at the Speculative Fiction in Translation Awards, and “The Robe” won Best Short Story at the Yinli (China Reader’s Choice) SF Awards. Apart from writing, she also dabbles in other art forms such as literary criticism, poetry, installation art and photography. Her commentary pieces have been published in The Economics Observer (China), Hong Kong and Shenzhen Literary Review.

Anna Wu is a Chinese science fiction, screen writer and playwright. She wrote the script for Of Cloud and Mist, which won Best Film at the 6th Xingyun Awards. Her works have been published on platforms such as Clarkesworld, Galaxy’s Edge and Science Fiction World. Some of Wu’s translated works have appeared as parts of collections, such as The Shape of Thought (translated by Ken Liu). Her science fiction collection, Double Life, was published in June 2017.

Han Song, science fiction writer, chairman of the Science Fiction Writers section of the Chinese Science Writers Association. Winner of multiple Yinhe, Xingyun and Tokyo Literature Awards. His signature works include “Subway”, “Hospital”, “The Red Sea”, Red Star Over America, Tombs of the Universe, and “Regenerated Bricks”. He has been translated into English, French, Italian, Japanese and other languages.

Renowned science-fiction author, Jiang Bo graduated from Qinghua University with a master’s degree in 2003, the same year as the publication of his debut. He has written over 40 pieces of short to medium-length fiction, totalling over 800,000 words. In 2012, he began creating longer works, of which well-known ones include Heart of the Galaxy trilogy, and Machine Gate. A recent winner of a Best Original Science Fiction award in China, he has also won the Yinhe Awards six times, and the Xingyun Gold Award four times and is considered a representative of China’s generation of “Sci-Fi Regeneration” writers.

Bao Shu is a Chinese SF writer who has won multiple major awards, and published four novels and three collections. His shorter works are published by celebrated magazines like Science Fiction World, Knowledge is Power, People’s Literature, Fiction World, and Flower City. Some of his works have been translated into multiple languages. Several of his stories are now available in English, published in F&SF and Clarkesworld. Redemption of Time (translated by Ken Liu), the officially sanctioned spin-off to Liu Cixin’s Remembrance of Earth’s Past trilogy, was published in 2019.

Born in 1990, A Que (a pseudonym) graduated from Sichuan University, and currently lives in Chengdu. As one of the representatives of New Science Fiction in China, he published his debut in 2012, and subsequently many works in Science Fiction World, as well as overseas, in English, winning the Xingyun and Yinhe Awards multiple times. His works mainly feature soft sci-fi, but A Que has an eclectic writing style. He loves robots, writes about them and eulogizes them. He hopes they’ll let him live once they’ve taken over the world. His published works include “Walking with Robots” and “The Living World of A.I.”.

Gu Shi is a speculative fiction writer and senior urban planner. She has been working as a researcher at the China Academy of Urban Planning and Design since 2012. Her short fiction works have won two Yinhe Awards and three Xingyun Awards. She published her first story collection Möbius Continuum in 2020. Her stories have been translated into English and published in Clarkesworld and Xprize’s Sci-fi Ocean Anthology.

Ma Boyong, writer. Winner of the People’s Literature Awards and Zhu Ziqing Prose Awards. His signature works include Two Capitals, Fifteen Days, The Great Ming Under the Microscrope, The Longest Day in Chang’An, Antiques and Intrigue, and Secrets of the The Three Kingdoms. Focussing his attention on historical speculative fiction, he is widely recognised to be one of the writers who set the bar for Chinese literature since the May the 4th reforms in the arts.

"This is science fiction from another culture, another history - another world. And full of gems." -- Stephen Baxter

"Sinopticon is an engaging brew of unsettling ideas and lively prose."
— ParSec Magazine

"Sinopticon reads like Black Mirror and Love, Death, and Robots squeezed together and poured onto the page. I laughed, I cried, I read and re-read, I stayed up through the early hours if it meant finishing one of the longer stories. This book is everything I love about Science Fiction." -- FanFiAddict