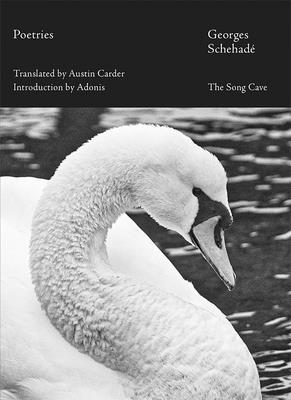 Poetry. Translated by Austin Carder. Featuring an introduction by Adonis. The first book-length translation of works by this important Egyptian-born, Lebanese-French poet, POETRIES presents the core of Georges Schehad 's (1905-1989) uvre. Though best known as a dramatist, Schehad was first and foremost a poet. His lifework was the seven volumes of crystalline poems published over a span of nearly a half-century (1938-1985), each successive volume simply and enigmatically titled POETRIES. It is from these seven books that our selection has been drawn.

In 1986, the Acad mie Francaise awarded Georges Schehad the inaugural Grand Prix de la Francophonie. Despite having received wide admiration from his contemporaries--including Max Jacob, Octavio Paz, Andr Breton, and Paul Eluard--the poetry of Georges Schehad is virtually unknown today, with this collection being the very first translated into English. In his translator's note, Austin Carder calls this collection a lullaby or an enigmatic fairytale told before bed. Its tone is one of self-sufficient prayer--a pronouncement rather than a plea--addressed to no one in particular and to anyone. These weathered songs key into the language of music, not by approximating its effects but by innervating sparks of meaning that flash forth...Schehad 's broken-off parables convulse with the dual beauty of both hymn and elegy.

Floating up as if from the weave of the page itself, these perfectly pitched versions of Georges Schehad 's Les Po sies convey a mysterious sense of the inevitable. One couldn't ask more of a translation, and with the gift of this one Austin Carder gives us (and English) a haunting new poet of magical clarity and uncanny quiet. This is a beautiful book.--Peter Cole