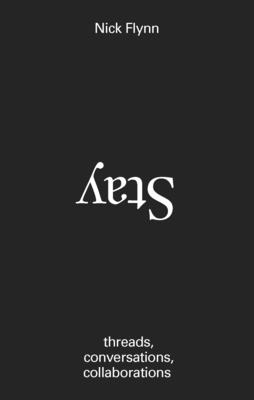 By Nick Flynn
$35.00
On Our Shelves Now (while supplies last)

"If Nick Flynn's Stay is a self-portrait, it is a self-portrait of our planet, of our contemporary consciousness in an undeniably wounded era. I think of it as an artist's notebook, a prayer book, a monumental compendium of what it means to stay alive." -Mary Ruefle
With Stay, acclaimed poet, artist, and bestselling memoirist Nick Flynn presents a self-portrait via a constellation of topics that have circled his work. Ranging from the impact of suicide and homelessness to addiction, political engagement, and the vital power of artistic friendships, Stay is a mixed-media retrospective that shows nothing is created in isolation.
Mirroring Flynn's life, this work of visual and literary memoir is populated by examples of his collaborations since the 1980s with such luminaries as the photographers Amy Arbus and Catherine Opie, composer Guy Barash, actor Robert De Niro, cartoonist Josh Neufeld, author Sarah Sentilles, filmmaker Paul Weitz, and artists John Baldessari, Marilyn Minter, and Bill Shuck. In Flynn's refusal to conform to narrative or the safety of his own perspective, Stay grasps for an essential truth, an answer to what art, in the end, can and cannot reflect.

Nick Flynn has worked as a ship's captain, an electrician, and a caseworker for homeless adults. Some of the venues his poems, essays, and nonfiction have appeared in include the New Yorker, the Nation, the Paris Review, the New York Times Book Review, and NPR's This American Life. His writing has won awards from the Guggenheim Foundation, the Library of Congress, PEN, and the Fine Arts Work Center, among other organizations. His film credits include artistic collaborator and "field poet" on Darwin's Nightmare (nominated for an Academy Award for best feature documentary in 2006), as well as executive producer and artistic collaborator on Being Flynn, the film version of his memoir Another Bullshit Night in Suck City. His most recent collection of poetry, I Will Destroy You, appeared from Graywolf Press in 2019. He is part of the creative writing faculty at the University of Houston, where each spring he teaches workshops in poetry, creative nonfiction, and interdisciplinary art. He lives in Brooklyn with his wife, Lili Taylor, and his daughter, Maeve. His work has been translated into fifteen languages. www.nickflynn.org