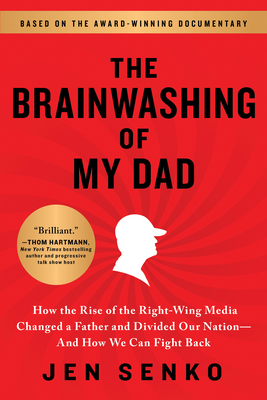 After her beloved dad got addicted to right-wing talk radio and Fox News, Jen Senko feared he would never be the same again...

Frank Senko had always known how to have a good time. Despite growing up in a poverty-stricken family during the Depression and having to fight his way to middle-class status as an adult, he tended to look on the bright side. But after a job change forced Frank to begin a long car commute every day, his daughter Jen noticed changes in his personality and beliefs. Long hours on the road listening to talk radio commentators like Rush Limbaugh sucked her father into a suspicion-laden worldview dominated by conspiracy theories, fake news, and rants about the "coastal elite" and "libtards" trying to destroy America.

Over the course of a few years, Jen's dad went from a nonpolitical, open-minded Democrat to a radical, angry, and intolerant right-wing devotee who became a stranger to those closest to him. As politics began to take precedence over everything else in her father's life, Jen was mystified. What happened to her dad? Was there anything she could do to help? And, most importantly, would he ever be his lovable self again? Jen began the search for answers, and found them... as well stories from countless other families like her own.

Based on the award-winning documentary, The Brainwashing of My Dad uncovers the alarming right-wing strategy to wield the media as a weapon against our very democracy. Jen's story shows us how Fox News and other ultra-conservative media outlets are reshaping the way millions of Americans view the world, and encourages us to fight back.

"Jen Senko explores the root cause of America's political crisis: the susceptibility of millions of our citizens to expert political propaganda. Tragically, one victim was her own father; luckily, she helped him recover. Anyone who wonders why there is so much hatred, division, and fear in the country needs to read this poignant story." — Mike Lofgren, New York Times bestselling author of The Deep State and The Party Is Over

"[Affecting]...liberals will have their worst suspicions about the right-wing mediasphere confirmed." — Publishers Weekly

"Jen's story is brilliant and gives us all insight about what we can do when lying right-wing media seize the minds of our friends and family." — Thom Hartmann, New York Times bestselling author and progressive talk show host

"The Brainwashing of My Dad is a pure delight—breezy to read while telling a compelling personal and big-picture story. The evolution of Jen Senko's dad from playful dad to crusty conservative and then back again is the lens through which she reveals the last 40 years of rightwing media propaganda. But while Senko details the corrosive grip that characters like Rush Limbaugh and Sean Hannity have had on our society, she inspires us with the redemption of her father and the superb suggestions to counter the spread of right-wing extremism. Read it and act!" — Medea Benjamin, author, activist, and cofounder of CODEPINK