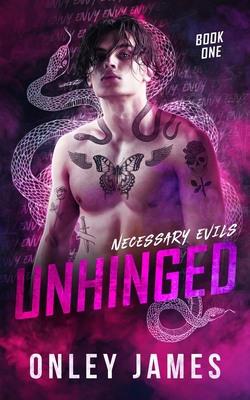 Adam Mulvaney lives a double life. By day, he's the spoiled youngest son of an eccentric billionaire. By night, he's an unrepentant killer, one of seven psychopaths raised to right the wrongs of a justice system that keeps failing.

Noah Holt has spent years dreaming of vengeance for the death of his father, but when faced with his killer, he learns a daunting truth he can't escape. His father was a monster.

Unable to ignore his own surfacing memories, Noah embarks on a quest to find the truth about his childhood with the help of an unlikely ally: the very person who murdered his father. Since their confrontation, Adam is obsessed with Noah, and he wants to help him uncover the answers he seeks, however dark they may be.

The two share a mutual attraction, but, deep down, Noah knows Adam's not like other boys. Adam can't love. He wasn't born that way. But he refuses to let Noah go, and Noah's not sure he wants him to.

Can Adam prove to Noah that passion, power, and protection are just as good as love?

Unhinged is a fast-paced, roller coaster ride of a romance with an HEA and no cliffhangers. It features a dirty-talking, possessive psychopath and a sweet cinnamon roll of a boy with Daddy issues and a core of steel. There's gratuitous violence, very dark humor, enough steam to fog up a hundred car windows, and something a lot like love. This is book one in the Necessary Evils series. Each book follows a different couple.