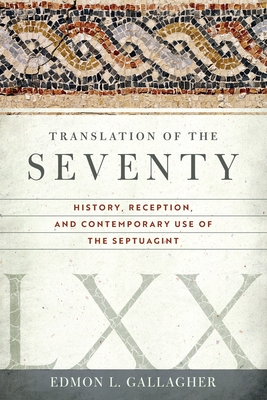 As the story goes, a few centuries before the birth of Jesus, seventy Jewish sages produced a Greek translation of the Hebrew Scriptures at the request of an Egyptian king. While some Jews believed this translation was itself inspired Scripture, even more significantly, the authors of what would later be called the New Testament relied on this translation as they quoted Scripture. Then in the centuries that followed, many Christians argued that God had provided the Septuagint as the church's Old Testament. But what about all the differences between the Septuagint and the Hebrew Bible? And what about the extra books of the Septuagint-the so-called Apocrypha or deuterocanonical literature?

Written with students in mind, Translation of the Seventy explores each of these issues, with a particular focus on the role of the Septuagint in early Christianity. This fresh analysis of the New Testament's use of the Septuagint and the complex reception of this translation in the first four centuries of Christian history will lead scholars, students, and general readers to a renewed appreciation for this first biblical translation.