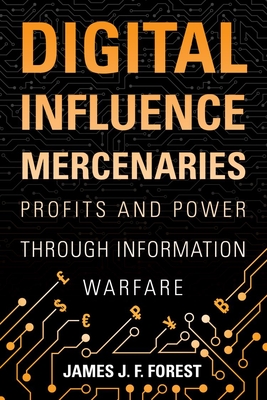 In today's online attention economy, supply and demand have created a rapidly growing market for firms and entrepreneurs using the tactics, tools, and strategies of digital influence warfare to gain profit and power. This book focuses on the more malicious types of online activity such as deception, provocation, and a host of other dirty tricks conducted by these "digital influence mercenaries." They can be located anywhere with an Internet connection--Brazil, China, Iran, Macedonia, Russia, Zimbabwe--and the targets of their influence efforts can be whomever and wherever they are paid to attack. They can do this for state governments willing to pay and provide their targeting instructions (usually in support of foreign policy objectives) and may have specific metrics by which they will assess the mercenaries' performance. Non-state actors (including corporations and political parties) can pay for these kinds of digital influence services as well. And in addition to being paid for services rendered, digital influence mercenaries can also profit simply by manipulating the targeted advertising algorithms used by social media platforms. James J. F. Forest describes in detail the various tools and tactics these mercenaries use to exploit the uncertainties, fears, and biases of their targets including bots, deep-fake images, fake news, provocation, deception and trolling. He also shows how they weaponize conspiracy theories and disinformation to manipulate people's beliefs and perceptions. Forest also highlights how government agencies and social media platforms are trying to defend against these foreign influence campaigns through such tactics as shutting down offending websites, Facebook pages, and YouTube channels; tagging disinformation with warning labels; identifying and blocking coordinated inauthentic behavior; and suspending social media accounts, often permanently.  European and North American governments have launched numerous investigations against these mercenaries, and in some cases have brought criminal charges. Forest concludes with suggestions for how each of us can learn to identify disinformation and other malicious efforts and defend ourselves in the future.

James J. F. Forest is a professor at the University of Massachusetts Lowell, and a visiting professor at the Fletcher School, Tufts University. He previously served on the faculty of the United States Military Academy, West Point (2001-2010), and served as a senior fellow at the U.S. Joint Special Operations University (2010-2019). He has published over twenty books and dozens of articles on various international security topics.