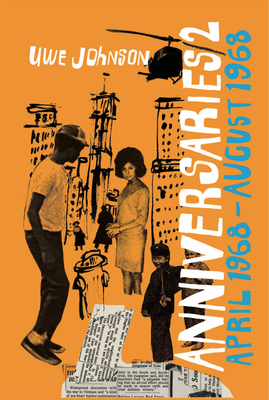 The second volume of a titanic masterpiece of twentieth-century literature, named one of the best books of 2019 by The New York Times critics.

Anniversaries, Volume 2 begins on April 20, 1968. Before long Marie will be devastated by the assassination of Robert F. Kennedy, even as the news of the Prague Spring has awakened Gesine’s long-dashed hopes that socialism could be a humanism. Meanwhile, her boss at the bank has his own ideas about Czechoslovakia, and Gesine faces the prospect of having to move there for work.

Continuing the story of her past from Anniversaries, Volume 1, Gesine describes the Soviet occupation of her hometown, Jerichow, where her father was installed as mayor and ended up in a brutal prison camp. Gesine herself charts a rebellious course through school, ever more bitterly conscious of the moral ugliness of life behind the Iron Curtain. As the year of the novel comes to its end, past and present converge and the novel circles back to its beginnings: Gesine tells Marie about her father, Jakob, dead before she was born, about leaving East Germany, and, as history threatens to take them away from New York, about the beginning of their life together in the city that they have both come to love.

Uwe Johnson (1934–1984) grew up in the small town of Anklam, Germany. He lived in New York City from 1966 until 1968 with his wife and daughter. It was during that time that he began work on Anniversaries. He died in Sheerness-on-Sea, UK, shortly after Anniversaries was published, at age forty-nine.

Damion Searls is the author of The Philosophy of Translation. He has translated some forty books, including, for NYRB Classics, works by Patrick Modiano, Alfred Döblin, Nescio, and Robert Walser.

“[Anniversaries] requires a hard chair, a fresh pen and your full attention — for attention is its great subject . . . Searls’s superb translation inscribes Johnson’s restlessness and probing into word choice and the structures of the sentences themselves, which quiver with the anxiety to get things right, to see the world as it is.” —Parul Sehgal, The New York Times

“Johnson’s book effectively gives the reader forty or fifty years of world history and a single year of Gesine’s life, every day from August 21st, 1967 to August, the 20th, 1968. Its scope is startling, from the social organization of a small German town, to Gesine’s work in a New York bank, to her father’s work as a master carpenter, running a business in Richmond, in London.” —Tom Sutcliffe, Saturday Review, BBC Radio 4

“I am absolutely stunned and slightly mortified that I’ve never heard of this book before . . . I think it’s extraordinary, I think it is a great late-modern masterpiece . . . How do you map Germany in 1933 with Vietnam? But, he does it, he does it in the first paragraph. It should be clunky or absurd or just slightly embarrassing, but he does it brilliantly. It contains the whole world. . . . I was completely gripped, and there are none of the usual narrative handholds, there’s no romantic relationship, you’re never quite certain why she’s on her own, who the father of the child is—all of those props are not available to us, and still it’s absolutely extraordinary.” —Kathryn Hughes, Saturday Review, BBC Radio 4

“This book is truly a masterpiece. . . . It is a record, and an enduring one for our whole post-Hitler era. You have actually made this past tangible and—perhaps a much harder task—you have made it convincing. Now I know how it was and is over there—know it down to the tips of my toes. . . . This seems to be the only appropriate way to speak and think: about great-grandmother and grandmother and mother and child, in the interplay of generations and across two continents.” —Hannah Arendt, February 7, 1972, Letter to Uwe Johnson

“Uwe Johnson is the most incorruptible writer I’ve ever read, always searching for what we so frivolously call the truth. In Anniversaries he approaches this fundamental thing, the truth, from different sides, across different continents, across time. Page after page, we are shown how we need to see clearly, without prejudice, to think properly. Page after page, thinking with Johnson offers us the greatest of pleasures.” —Jenny Erpenbeck

“Johnson has Balzac’s passion for the telling detail, the revealing exactitude, here a passion that is impelled by the imagination of love. So intensely are the figures imagined—Gesine and her daughter, Gesine’s desolated mother, and all the tribe of Baltic relatives who variously endure and resist the Nazi scourge—that the ballast of Manhattan fact is needed to keep the book on the page, the life in focus, to keep the agony from getting out of drawing.” —Richard Howard