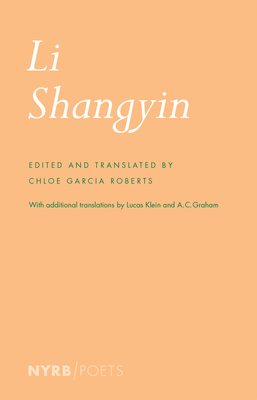 
Li Shangyin is one of the foremost poets of the late Tang, but until now he has rarely been translated into English, perhaps because the esotericism and sensuality of his work set him apart from the austere masters of the Chinese literary canon. Li favored allusiveness over directness, and his poems unfurl through mysterious images before coalescing into an emotional whole. Combining hedonistic aestheticism with stark fatalism, Li’s poetry is an intoxicating mixture of pleasure and grief, desire and loss, everywhere imbued with a singular nostalgia for the present moment.

This pioneering, bilingual edition presents Chloe Garcia Roberts’s translations of a wide selection of Li’s verse in the company of other versions by the prominent sinologist A. C. Graham and the scholar-poet Lucas Klein.

Li Shangyin (813–858) had an unremarkable career as a low-level official in various capacities, which included county sheriff, classics professor, and collator in the Imperial Library. He turned to Buddhism later in his life and died a widower at the age of forty-five.


Chloe Garcia Roberts is the author of The Reveal, a book of poetry, and the translator of Li Shangyin’s Derangements of My Contemporaries: Miscellaneous Notes as well as of Cao Wenxuan’s children’s book Feather. She studied Chinese at Wesleyan University, the School of Oriental and African Studies in London, and the University of Oregon. She currently lives in Boston, where she is the managing editor at the Harvard Review.

Lucas Klein is an assistant professor at the School of Chinese at the University of Hong Kong. Among his translations are Notes on the Mosquito: Selected Poems of Xi Chuan (winner of the 2013 Lucien Stryk Prize) and October Dedications, translations of the poetry of Mang Ke.

A.C. Graham (1919–1991) spent his academic career at the School of Oriental and African Studies in London and is credited with introducing into English several little-known works of Chinese classical literature and philosophy. New York Review Books publishes his influential anthology, Poems of the Late T’ang, as part of its Classics series.

"Garcia Roberts's translation represents an original approach to one of the most distinctive and challenging voices of the classical Chinese canon…Li’s startling images and aural complexity gain new life in Garcia Roberts’s hands.” —Theophilus Kwek, Asymptote

“Li Shangyin’s poetry embodies passion, commitment, and conflict....He extended the scope of Chinese poetry by exploring spheres of experience previously untouched by poets.” —James J. Y. Liu
“His use of allusion is the subtlest in Tang poetry – abrupt transitions in which an allusion provides the unmentioned bridge, delicate variations on commonplace references, oblique glimpses of historical events, direct presentation of a scene before his eyes in which one senses elusive parallels with a scene in history or poetry.” —A. C. Graham