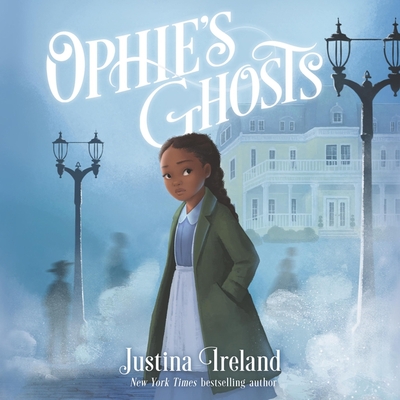 By Justina Ireland, Bahni Turpin (Read by)
$34.99
Email orders@greenlightbookstore.com for information about this item.

“Ophie is a smart girl with a scary talent. Ophie is growing up in post WWI racist America, dealing with a lot of darkness in her life, and some of it is definitely unnatural. Her father's grisly death, she and her mom's struggle to make ends meet and the ghosts! are all part of the life she never imagined. A slice of history, a brave little girl and a rip roaring/slightly scary adventure will earn Ophie a lot of love from readers!”
— Margaret Neville, The King's English Bookshop, Salt Lake City, UT

The New York Times bestselling author of Dread Nation makes her middle grade debut with a sweeping tale of the ghosts of our past that won't stay buried, starring an unforgettable girl named Ophie, performed by Audible Hall-of-Famer Bahni Turpin.

Ophelia Harrison used to live in a small house in the Georgia countryside. But that was before the night in November 1922, and the cruel act that took her home and her father from her. Which was the same night that Ophie learned she can see ghosts.

Now Ophie and her mother are living in Pittsburgh with relatives they barely know. In the hopes of earning enough money to get their own place, Mama has gotten Ophie a job as a maid in the same old manor house where she works.

Daffodil Manor, like the wealthy Caruthers family who owns it, is haunted by memories and prejudices of the past--and, as Ophie discovers, ghosts as well. Ghosts who have their own loves and hatreds and desires, ghosts who have wronged others and ghosts who have themselves been wronged. And as Ophie forms a friendship with one spirit whose life ended suddenly and unjustly, she wonders if she might be able to help--even as she comes to realize that Daffodil Manor may hold more secrets than she bargained for.