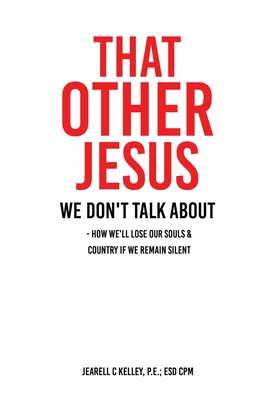 What would Jesus' response be to the socialists' political power grab with election fraud or to their culture manipulation with critical race theory? Early American ministers not only recognized Christ in the prophets and apostles, but their sermons proclaimed That Other Jesus for the protection of religious liberties that were foundational to all American freedoms. These motivational sermons against tyranny have been censored for decades. Did we think our freedoms were forever secure? That other Jesus motivates serious rethinking of our spirituality and its application to America's problems with the family, education, politics and the government's tyrannical overreach in personal liberties. Today, as massive election fraud evidence grows, many remain disengaged to protect their vote or their freedoms. Thus illegal/tyrannical political power is not fully contested. After Hitler gained full power, the sleeping German Church later regretted their missed opportunities. Is the American Church asleep to their Deitrich Bonhoeffer's or Christ's warnings? It's time for another Great Awakening Will Christians self-examine, repent and fully obey Christ as revealed in both Old and New Testaments as it pertains to all of life or will state-induced fear defeat and control us? Finding phantom voters and churches repeating the same mistakes under Hitler inspired That Other Jesus. What's at stake? Not just church closures, but extreme future abuses against Christians who forget That Other Jesus who is the truth that will set us free. While serving the U.S. Space Force as a technical consultant at Headquarters Space Operations Command, Jerry received a Military & Aerospace cybersecurity seminar advertisement. One class was titled, "Why we'll never keep the bad guys out." This added to his collection of electronic voting machine fraud evidence. His personal experience of finding phantom voters in Colorado and seeing the American Church repeating the German Church's mistakes under Hitler, inspired him to write That Other Jesus with biblical action plans for today's Church.