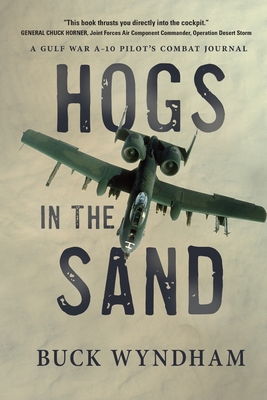 "I am awed by my destructive power. With a small squeeze of the gun trigger under my right index finger, I can rip the turret off a thirty-ton battle tank and throw it 200 feet across the desert, while the rest of the tank burns in an explosion of white-hot, burning phosphorescence. But the cold, morbid reality of it does not exist from where I sit and watch it happen. There's no dramatic chord. No deafening explosion. No screams suddenly stifled. The soundtrack of a pilot's war is mostly silent."
The mighty, iconic A-10 Warthog was first thrust into battle in Operation Desert Storm. The men who took it through walls of flak and surface-to-air missiles to help defeat the world's fourth-largest army were as untested as their airplanes, so they relied on personal determination and the amazing A-10 to accomplish their missions, despite the odds.
Hogs in the Sand is the gripping journey of one of those pilots as he fights an increasingly terrifying war, all the while attempting to win over a woman and keep control of his internal demons. For anyone who has admired the Warthog, seen it in action, or called upon it to be their salvation, this story will fulfill a desire to virtually strap into the cockpit, while gaining unprecedented understanding of the mind of a modern combat pilot.