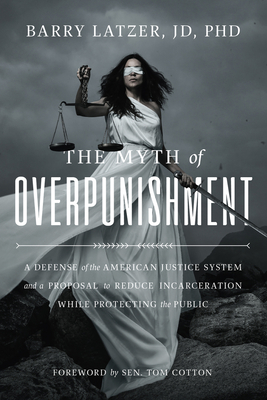 Justice is on trial in the United States. From police to prisons, the justice system is accused of overpunishing. It is said that too many Americans are abused by the police, arrested, jailed, and imprisoned. But the denunciations are overblown. The data indicates, contrary to the critics, that we don’t imprison too many, nor do we overpunish. This becomes evident when we examine the crimes of prisoners and the actual time served. The history of punishment in the United States, discussed in vivid detail, reveals that the treatment of offenders has become progressively more lenient. Corporal punishment is no more. The death penalty has become a rarity. Many convicted defendants are given no-incarceration sentences. Restorative justice may be a good thing for low-level offenses, or as an add-on for remorseful prisoners, but when it comes to major crimes it is no substitute for punitive justice. The Myth of Overpunishment presents a workable and politically feasible plan to electronically monitor arrested suspects prior to adjudication (bail reform), defendants placed on probation, and parolees.

For over three and a half decades Barry Latzer was Professor of Criminal Justice at John Jay College, CUNY, where he was a member of the Masters’ and Doctoral faculties. He taught courses on criminal justice, criminal law and procedure, state constitutional law, capital punishment, and most recently, crime history. Professor Latzer wrote and published five books (including one forthcoming in 2021) and approximately 90 scholarly articles, research reports, magazine articles, book reviews and op-eds. His scholarly articles have been published in the Journal of Criminal Law & Criminology, the Journal of Criminal Justice, Judicature, Judges' Journal, Criminal Law Bulletin, and major law reviews. Other writings have appeared in the Wall Street Journal, the Los Angeles Times, the Daily Beast, National Review, the Chronicle of Higher Education, City Journal, the Law & Liberty website, the New York Post and the New York Daily News. A widely read interview with David Frum appeared in Atlantic, June 19, 2016. Professor Latzer received a Ph.D. from the University of Massachusetts (1977), and a law degree from Fordham University (1985). His BA was from Brooklyn College (1966). He briefly served as an Assistant District Attorney in Brooklyn (1985-86) and as counsel to indigent criminal defendants in Manhattan (1986-87).

Tom Cotton is a United States Senator from Arkansas. Tom sits on the Senate Committees on Armed Services, Intelligence, and Judiciary. Tom grew up on his family’s cattle farm in Yell County. After a clerkship with the U.S. Court of Appeals and private law practice, Tom left the law because of the September 11th attacks. Tom served in Iraq with the 101st Airborne and in Afghanistan with a Provincial Reconstruction Team. Between his two combat tours, Tom served with The Old Guard at Arlington National Cemetery. Tom is the author of, “Sacred Duty: A Soldier’s Tour at Arlington National Cemetery,” a portrait of The Old Guard. Between the Army and the Senate, Tom worked for McKinsey & Co. and served in the U.S. House of Representatives.