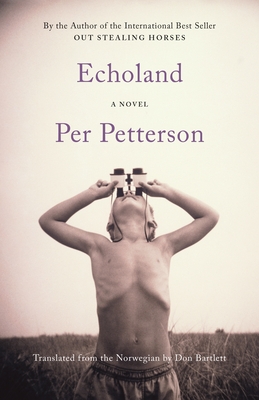 The shimmering, windswept first novel by the internationally acclaimed author of Out Stealing Horses.

Echoland is the powerful and emotionally resonant first novel from Per Petterson. Written in the mold of his early story collection Ashes in My Mouth, Sand in My Shoes, it features a young Arvid Janssen, who is now twelve, on the verge of his teenage years and beginning to understand more about the world and his place in it. Set over the course of a single formative summer, the novel captures a series of episodes from Arvid’s long visit to his grandparents’ home in Denmark. He rides his bike around town, befriends other children on the beach, fishes for plaice, and weathers misunderstandings with his mother and grandparents, all of which Petterson imbues with the hope and yearning that come with this stage of life. Echoland is an assured and poignant beginning for an author—and character—who would go on to be loved the world over.

Per Petterson is the author of books including In the Wake, To Siberia, and I Curse the River of Time. Out Stealing Horses has won the IMPAC Dublin Literary Award, the Independent Foreign Fiction Prize and the Norwegian Booksellers' Prize. The New York Times Book Review named it one of the 10 best books of the year. A former bookseller, Petterson lives in Oslo, Norway.

“Merging time and memory to reveal the trauma, confusion, and exhilaration of growing up, this coming-of-age novel proves that Petterson’s immense talent was on display from the very first.”—Library Journal, starred review