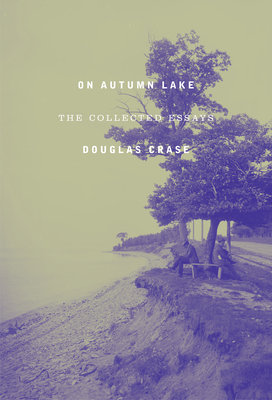 On Autumn Lake collects four decades of prose (1976-2020) by renowned poet and beloved cult figure Douglas Crase, with an emphasis on idiosyncratic essays about quintessentially American poets and the enduring transcendentalist tradition.

Douglas Crase's prose is rich with conviction and desire, inspiring as John Yau wrote, "the kind of attention usually reserved for poetry." His essays, written as rhythmically as poems, take a personal rather than abstract approach, offering committed and sometimes intimate portraits of John Ashbery, James Schuyler, Lorine Niedecker, and others. With generosity of spirit, Crase shares his devotion to poetry, democracy, and landscape in this handsome volume that greatly enlarges the available body of his work and will be seen as the essential complement to his collected poems.

Douglas Crase is an independent poet and essayist. He was born in Michigan in 1944, raised on a farm, and educated at Princeton. A former speechwriter, he was described in the Times Literary Supplement as "the unusual case of a contemporary poet whose most public, expansive voice is his most authentic," and in Hyperallergic as "that rare figure in American letters: a subversive who challenges the received wisdom promulgated in English and American literature departments from sea to shining sea." His first book, The Revisionist, was named a Notable Book of the Year in 1981 by The New York Times and nominated for a National Book Critics Circle Award and a National Book Award in poetry. His collected poems, The Revisionist and The Astropastorals, was a finalist for the Lambda Literary Award and named a Book of the Year for 2019 in both the Times Literary Supplementand Hyperallergic. His dual biography of influential aesthetes Rupert Barneby and Dwight Ripley, Both: A Portrait in Two Parts, was nominated for a Lambda Literary Award and named a Stonewall Honor Book by the American Library Association. He has received a Whiting Writers' Award, a Guggenheim Fellowship, and a MacArthur "genius" award. He lives with his husband, Frank Polach, in New York and Carley Brook, Pennsylvania.