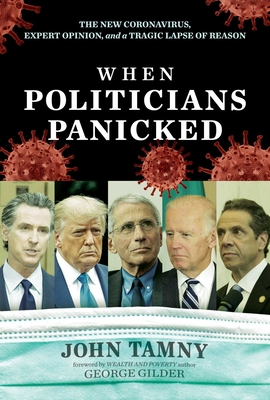 When Politicians Panicked tells the tragic story of how, in response to a spreading virus, global politicians mindlessly pursued economic desperation, starvation, and death as the cure.

The global economy was booming as 2020 dawned, but within a few short months wreckage, death, and desperation borne of economic contraction were the new normal. What happened?

In When Politicians Panicked, economic commentator John Tamny tells the heart-wrenching story of a time when politicians were tragically relieved of basic common sense in their response to the new coronavirus.

In March of 2020, the virus quickly became a major news item as political panic about it traveled around the world. Even though anecdotal and market-based evidence from the virus’s epicenter indicated very low lethality, politicians quickly imposed economy-crushing lockdowns on the rather specious assumption that unemployment, bankruptcy, and starvation would somehow halt the virus’s spread.

Tamny methodically dismantles the political consensus by showing how economic growth has long been the first and last answer to death and disease. He then shows how politicians, having mindlessly crushed a growing economy, proceeded to double down on their mistakes by throwing taxpayer money at their shocking errors.

Throughout When Politicians Panicked, Tamny makes a relentless case that free people don’t just produce the wealth that renders today’s killers yesterday’s news. They also produce crucial information about health threats that shine a light on that which threatens us. Lockdowns suffocate economic progress, but they also blind us to how we can progress—as Tamny makes plain in what will go down as an essential history for anyone seeking to understand the coronavirus panic of 2020.

John Tamny is vice president at FreedomWorks, and director of its Center for Economic Freedom. He’s also editor of RealClearMarkets, and senior economic adviser to mutual fund firm Applied Finance Group. Past books by Tamny include Popular Economics (Regnery, 2015), a primer on economics, Who Needs the Fed? (Encounter, 2016), about the central bank’s onrushing irrelevance, The End of Work (Regnery, 2018), which discusses the exciting evolution of jobs that don’t feel at all like work, and They’re Both Wrong: A Policy Guide for America's Frustrated Independent Thinkers (AIER, 2019). Tamny lives in Bethesda, MD, with his wife, Kendall, and kids, Claire and Reed.

"A society or a civilization which is poorer will be less capable of coping with a public health crisis. Now, if that seems like a commonsense observation, well that is because that is exactly what it is. To anyone who has lived through what passes for health and economic policy in 2020, though, John Tamny's provocative book—based as it is on that observation—will come as a shock. Tamny's book is an excellent contribution to the conversation that the world will need so that the mistakes made during this epidemic are never made again."
— Jay Bhattacharya, Professor of Medicine, Stanford University

"John Tamny bravely describes the terrible and senseless economic pain caused by politicians panicking in the face of a health concern that—let's be real—is no worse than a bad flu season."
— Rich Karlgaard, Publisher of "Forbes"

"The response of governments around the world to the coronavirus has been a colossal policy error—probably the worst in humanity's history. We'll be struggling to understand what went wrong for the next fifty years. When Politicians Panicked will bring essential clarity."
— Toby Young, LockdownSceptics.org

"John Tamny's myth-shattering new groundbreaker, When Politicians Panicked—isn't really about COVID-19 but a radically yet stunningly older, better way to envision it, innovation, healthcare and its evolution, economics, wealth creation and our overall culture—both by what is normally seen and unseen."
— Ken Fisher, Founder and Executive Chairman, Fisher Investments

"The intellectuals often get things wrong but it is the politicians that weaponize their errors. Read Tamny's riveting account of what is surely the greatest failure of politics in many generations. And work to make sure nothing like this ever happens again."
— Jeffrey Tucker, Author of "Liberty or Lockdown"