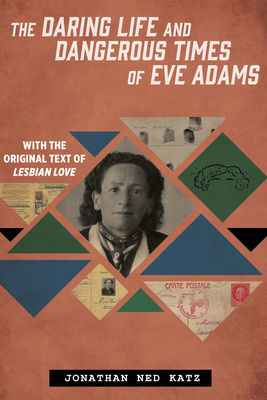 “On these pages, Eve Adams rises up, loves, rebels—her times, eerily resembling our own.” —Joan Nestle, cofounder of the Lesbian Herstory Archives and author of A Restricted Country

Born Chawa Zloczewer into a Jewish family in Poland, Eve Adams emigrated to the United States in 1912,took a new name, befriended anarchists, sold radical publications, and ran lesbian-and-gay-friendly speakeasies in Chicago and New York. Then, in 1925, Adams risked all to write and publish a book titled Lesbian Love.

Adams’s bold activism caught the attention of the young J. Edgar Hoover and the US Bureau of Investigation, leading to her surveillance and arrest. Adams was convicted of publishing an obscene book and of attempted sex with a policewoman sent to entrap her.

Adams was jailed and then deported back to Europe, and ultimately murdered by Nazis in Auschwitz. In The Daring Life and Dangerous Times of Eve Adams, acclaimed historian Jonathan Ned Katz has recovered the extraordinary story of an early, daring activist.

Jonathan Ned Katz is the author of four pioneering books on the US history of life, sexuality, and intimacy. He is the founder of outhistory.org, and he has taught and spoken at Yale, Harvard, and Princeton. He's also the recipient of the Magnus Hirschfeld Medal for outstanding contributions to sex research and Yale University's Brudner Prize, among many other accolades.

"This is an impressive feat of research as well as a fascinating and important story about an unsung and, until now, invisible figure in gay history.” — Booklist, STARRED review

“The Daring Times and Dangerous Life of Eve Adams, . . . is an animated biography, but it is also a kind of rescue mission, as queer histories often must be.” —The New Yorker

"“[The] fascinating story of Eve Adams . . . is presented in full, rich terms, showing how she was affected by the world, and was affecting in turn." — Foreword Reviews