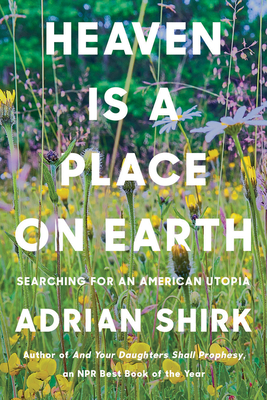 Told in a series of essays that balance memoir with fieldwork, Heaven Is a Place on Earth is an idiosyncratic study of American utopian experiments—from the Shakers to the radical faerie communes of Short Mountain to the Bronx rebuilding movement—through the lens of one woman’s quest to create a more communal life in a time of unending economic and social precarity.

When Adrian Shirk’s father-in-law has a stroke and loses his ability to speak and walk, she and her husband—both adjuncts in their midtwenties—become his primary caretakers. The stress of these new responsibilities, coupled with navigating America’s broken health-care system and ordinary twenty-first-century financial insecurity, propels Shirk into an odyssey through the history and present of American utopian experiments in the hope that they might offer a way forward.

Along the way, Shirk seeks solace in her own community of friends, artists, and theologians. They try to imagine a different kind of life, examining what might be replicable within the histories of utopia-making, and what might be doomed. Rather than “no place,” Shirk reframes utopia as something that, according to the laws of capital and conquest, shouldn’t be able to exist—but does anyway, if only for a moment.

ADRIAN SHIRK is an essayist and memoirist. She is the author of And Your Daughters Shall Prophesy, named an NPR Best Book of 2017. Shirk was raised in Portland, Oregon, and has since lived in New York and Wyoming. She is a frequent contributor to Catapult, and her essays have appeared in The Atlantic and Atlas Obscura, among other publications. Currently, she teaches in Pratt Institute’s BFA creative writing program and lives at the Mutual Aid Society in the Catskill Mountains.

"A mix of travel writing, memoir, historical biography, and spiritual journey, Heaven is a Place on Earth . . . is impeccably researched and vivid in its telling. Given the current state of the planet, it will likely provoke some serious soul-searching too." —Jini Reddy, Resurgence & Ecologist Magazine

"Shirk’s relentlessly optimistic outlook on humanity and her joy in the pleasures of life make for a more or less uplifting read." —Carly Willsie, The Rumpus

"I loved Shirk’s book so much: its expansive, sometimes rambling structure feels less like being lectured on best practices and more like having a long conversation with your most interesting, well-read friend about what to try to build next. Reading it made me move the borders of my mind, if only a little: to try to see out of the corners of my eyes, past what I expect to what might be possible if I looked at my life from another angle, tried something different for once. It gave me language for things I had thought only abstractly or opaquely. It made me feel, fundamentally, intellectually and spiritually less alone." —Zan Romanoff, Literary Hub

"Adrian Shirk (And Your Daughters Shall Prophesy) delves into the enduring allure of utopian communities in Heaven Is a Place on Earth, her second entrancing study of religious history . . . Amusing asides tell the stories of utopia founders, visitors and 'groupies,' such as Marguerite Young. Shirk shares her personal struggles with failure, idealism and privilege, noting that these projects generally are undertaken by white people and require financial security. She consistently grounds the historical and theoretical material in this flowing narrative . . . This wide-ranging study of the utopian ideal in American culture is made personal through the author's own experiences with communal living." —Rebecca Foster, Shelf Awareness

"[A] sprawling synthesis of memoir and social history . . . Shirk writes deftly and in depth. She is well-attuned to her topic’s threads of historical and spiritual complexity as well as her own feelings about relationships, sexuality, and community . . . [A] rigorous, personalized argument for the continued relevance of an old idea." —Kirkus Reviews

"Melding memoir with wide-ranging research into American experiments in communal living like the Shakers and The Farm (an intentional community founded by hippies in the late 1960s), Shirk seeks historical and contemporary ways of living that are more sustainable, bountiful, creative, and supportive than the siloed, workhorse model favored under capitalism. Without idealizing these communal experiments, Shirk takes their complexities and contradictions as part of the necessary reality of imagining other ways of living." —Booklist (starred review)

"Essayist Shirk (And Your Daughters Shall Prophesy) mixes autobiography and history in this enlightening study of utopian communities in America . . . Enriched by Shirk’s trenchant observations and open-minded curiosity, this is a winning survey of the desire to make the world a better place." —Publishers Weekly

"Heaven is a Place On Earth is the most beguiling invitation I've received in years. It offers a radically new way of thinking about the radical promises of utopia—one that is dynamic, paradigm-shifting, and, above all else, enthralling. It's an exquisite book, but it's also an open door for all who've been hungering for a new way to think of community and our place within it." —Anne Helen Petersen, author of Can't Even

"This book could not have come at a better time. At a moment when it can seem as if this country will never put its pieces together, Adrian Shirk gives us so many instances, historical and present-day, of Americans finding ways to live in real community, to carve out places of freedom, to be brave enough to stare our unhappinesses in the face and ask What more could there be? In a voice electric with possibility, Shirk reminds us of the great risk and great possibility contained in the act of reimagining home." —Alex Mar, author of Witches of America

"As she physically travels all over our country and through some of life’s roughest emotional terrain—grief, regret, inadequacy, betrayal, unrequited idealism—Adrian Shirk takes the reader on a rich, lyrical journey of what it feels and looks like to persist in hope. Whether those hopes are in the form of a utopian farm cooperative formed in the 1800s or earnest hipsters gathering in upstate New York, even if you don’t share their same dreams Shirk's writing leaves you wanting to treat hope, as she puts it, as a vocation. Heaven is a Place on Earth is not so much a study of utopianism as a meditation. Shirk has a skillful way of weaving together the scraps of seemingly unrelated snippets and insights into a gorgeous quilt of meaning. Utopian-ists want what we all want—fulfillment, happiness, community, but they don’t give up when life refuses to deliver. This book is a raw examination of that combination of obsession and grit—and it’s masterful." —Kate Kelly, human rights lawyer and author of Ordinary Equality

"What kind of world will we create in the wake of a global pandemic and armed insurrection, in the midst of climate chaos, systemic racism, and inequity? In Heaven is a Place on Earth, the brilliant Adrian Shirk is looking for an existence that is more than just mere existence, more than 'waged labor,' a life that is less extractive, capitalistic, and crushing. A life that is instead, meaningful, creative, and beautiful. In these pages, I found myself believing such a thing might be possible, and you will too—a testament to Adrian’s tremendous power as a writer, intellectual, and human. This is an important book for the moment we find ourselves in." —Cameron Dezen Hammon, author of This Is My Body: A Memoir of Religious and Romantic Obsession