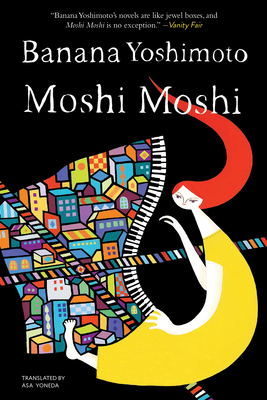 After Yoshie's father commits suicide in a pact with an unknown woman, she begins to constantly dream that he is trying to find his phone to call her. Certain that it must mean something, she begins investigating his death, unraveling truths about her father that only lead to more confusion and pain. Intimate, personal, and close to the heart, this book is a beautiful, profoundly human portrayal of how we learn to cope with a loss that we can't make sense of, and ultimately, how to rebuild in the face of all the unanswered questions that remain.

A beautiful translation...Yoshimoto deploys a magically Japanese light touch to emotionally and existentially tough subject matter: domestic disarray, loneliness, identity issues, lovesickness... a] nimble narrative. ―ELLE
In Moshi Moshi, Yoshie's much-loved musician father has died in a suicide pact with an unknown woman. It is only when Yoshie and her mother move to Shimokitazawa, a traditional Tokyo neighborhood of narrow streets, quirky shops, and friendly residents that they can finally start to put their painful past behind them. However, despite their attempts to move forward, Yoshie is haunted by nightmares in which her father is looking for the phone he left behind on the day he died, or on which she is trying--unsuccessfully--to call him. Is her dead father trying to communicate a message to her through these dreams?
With the lightness of touch and surreal detachment that are the hallmarks of her writing, Banana Yoshimoto turns a potential tragedy into a poignant coming-of-age ghost story and a life-affirming homage to the healing powers of community, food, and family.

Banana Yashimoto was born in Tokyo in 1964 and graduated from Nihon University, College of Art, where she majored in literature. She debuted as a writer in 1987 with Kitchen, a novella that won her the 6th Kaien Newcomers' Literary Prize. In 1988, Moonlight Shadow, her thesis story, was awarded the 16th Izumi Kyoka Prize for Literature. Then, in 1989, she received two accolades: the 39th Recommendation by the Minister of Education for Best Newcomer Artist, for Kitchen and Utakata/Sanctuary, and the 2nd Yamamoto Shugoro Literary Prize, for Goodbye Tsugumi. In 1995 she won the 5th Murasaki Shikibu Prize, for Amrita, a full-length novel. And in 2000, Furin to Nambei, a collection of stories set in South America, received the 10th Bunkamura Deux Magots Literary Prize. Her works have been translated and published in more than 30 countries. Outside of Japan, too, she has won several awards. In Italy she won the Scanno Literary Prize in 1993, the Fendissime Literary Prize in 1996, the Maschera d'argento Prize in 1999, and the Capri Award in 2011. Recent works include Tori Tachi, Circus Night, Funa-Funa Funabashi, and Iyashi no Uta. Asa Yoneda was born in Osaka and translates from Japanese. She currently lives in Bristol.