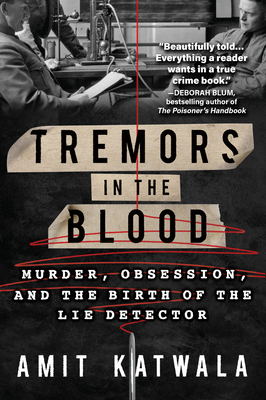 A thrilling account of the creation of the so-called lie detector, exploring shocking murders and dramatic trials to uncover the true nature of the polygraph. This tense true crime story is perfect for fans of American Predator and The Invention of Murder.

Late one evening in the summer of 1922, Henry Wilkens burst through the doors of the emergency room covered in his wife’s blood. But was he a grieving husband, or a ruthless killer who conspired with bandits to have her murdered?

To find out, the San Francisco police turned to technology and a new machine that had just been invented in Berkeley by a rookie detective, a visionary police chief, and a teenage magician with a showman’s touch.

John Larson, Gus Vollmer and Leonarde Keeler hoped the lie detector would make the justice system fairer – but the flawed device soon grew too powerful for them to control. It poisoned their lives, turned fast friends into bitter enemies, and as it conquered America and the world, it transformed our relationship with the truth in ways that are still being felt.

As new forms of lie detection gain momentum in the present day, Tremors in the Blood reveals the incredible truth behind the creation of the polygraph, through gripping true crime cases featuring explosive gunfights, shocking twists and high-stakes courtroom drama.

Touching on psychology, technology and the science of the truth, Tremors in the Blood is a vibrant, atmospheric thriller, and a warning from history: beware what you believe.

Amit Katwala is an award-winning journalist and editor. He is a senior writer at WIRED, based in London. He writes about the collision between technology and culture, and has covered everything from the race for quantum supremacy to the hunt for the mysterious Planet Nine. He grew up in Bournemouth, and studied experimental psychology at Oxford University.

Praise for Tremors in the Blood:
“Tremors in the Blood, Amit Katwala's beautifully told origin story of the lie detector, contains just about everything a reader wants in a true crime book - murder, mystery, gunfights, courtroom theatrics and dogged police work - along with a solid exploration of the ethically troubling issues that continue to haunt criminal justice and its sometimes dubious tools.”
—Deborah Blum, bestselling author of The Poisoner's Handbook

“Gripping . . . I was hooked.”
—Sirin Kale, feature writer for The Guardian

“A gripping, forensically detailed account that reads more like a mystery than history.”
—Angela Saini, author of Superior and Inferior