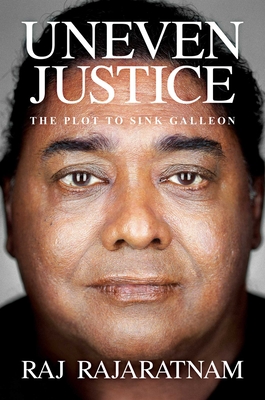 The inside story of a case that illustrates the horrific perils of unchecked prosecutorial overreach, written by the man who experienced it firsthand.

Raj Rajaratnam, the respected founder of the iconic hedge fund Galleon Group, which managed $7 billion and employed 180 people in its heyday, chose to go to trial rather than concede to a false narrative concocted by ambitious prosecutors looking for a scapegoat for the 2008 financial crisis. Naively perhaps, Rajaratnam had expected to get a fair hearing in court. As an immigrant who had achieved tremendous success in his adopted country, he trusted the system. He had not anticipated prosecutorial overreach—inspired by political ambition—FBI fabrications, judicial compliance, and lies told under oath by cooperating witnesses. In the end, Rajaratnam was convicted and sentenced to eleven years in prison. He served seven and a half.

Meanwhile, not a single senior bank executive responsible for the financial crisis was even charged.

Uneven Justice is the story of his bewildering and confounding prosecution by forces who, quite frankly, were looking for bigger game. When Rajaratnam refused to support the narrative that would make that happen, he and the Galleon Group became collateral damage.

A cautionary tale with implications for us all, Uneven Justice is both a riveting page-turner and an eye-opening lesson in the vagaries of justice when an unscrupulous prosecutor is calling the shots.

A father to three children, Raj Rajaratnam lives in Manhattan with his wife of thirty-three years.

“The book, "Uneven Justice," makes a persuasive case that this prosecution served to cover up the embarrassment of the Obama DOJ's malfeasance and advance the ambitious Bharara's career. But it's most important point is that the entire justice system is rigged against defendants.

Obviously, few people are going to sympathize with a billionaire hedge fund manager. But that's the point. That's not the book's goal. His case is done. The book is a genuine, serious, in-depth study of all the ways federal prosecutors have unchecked power to destroy people.