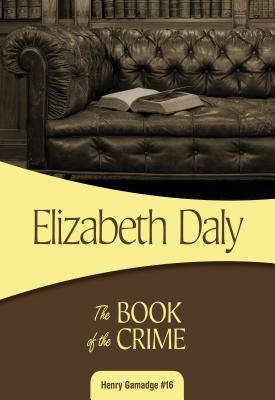 This is book number 16 in the Henry Gamadge Mysteries series.

Young Rena Austen, newly wed, is afraid she's made a terrible mistake. Her husband, once a dashingly romantic figure of a wounded war hero, has turned into a moody lay-about, and they are sharing a gloomy house on the Upper East Side of New York with his unpleasant, always-there family. When her husband reacts in a frighteningly angry way to Rena pulling a particular volume off the library shelf, she has had enough, and flees her home in fear for her life. Thankfully, Henry Gamadge is on hand to solve the mystery of the book and the dead body that inevitably turns up. This 1951 novel is, sadly, Gamadge's last appearance, but on the bright side he is as charming here as he was on his first outing.

Elizabeth Daly was the author of 16 novels in the Henry Gamadge series, published between 1939 and 1951. She came to mystery writing late in life, beginning the series when she was in her 60s. In 1960 she won an Edgar award for her work. She lived in New York.